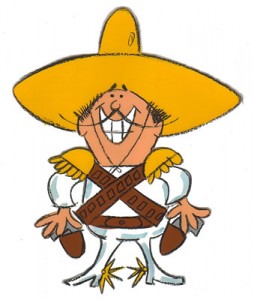 One of the irrefutable Surf Report Rules of Thumb is that “nobody cares about the weird dream you had last night.”  I know it, all the way down to my skeleton (which is a long way), but still feel compelled to tell you about the one I had earlier this week…

Toney and I were in London, you see, inside a huge crowd.  It might’ve been at Trafalgar Square, I’m not sure, and people were everywhere.

Since I don’t like being trapped in a crush of humanity, I was mildly panicked and trying to get away from the chaos.  And when we finally escaped, I realized there was something in my right jacket pocket.  The crap?

Turns out it was a cheap digital camera, that I’d never seen before, with eleven images already saved in the memory.  I showed it to Toney, and she said we should take a look at the pictures.

And every one of them featured a young girl, maybe fourteen or fifteen years old, lying on a bed in various states of undress.

What in the finger-snappin’ hell??  Was I being set-up?  Would somebody be jumping from the crowd soon, with a tall-hat cop in tow, and pointing at me:  “There he is officer!  That fat fuck in the Brooklyn Dodgers cap!!”

Completely stressed, I asked Toney how we should get rid of the camera.  We finally decided we’d throw it down a sewer, so fingerprints couldn’t be lifted from it.

And for the remainder of the dream (until the real-life Toney woke me up), we were power-walking through the streets of London, frantically looking for a sewer opening, or a storm drain.  And there weren’t any!

When the real Toney shook me awake my heart was racing and I was overcome by paranoia.  Even after I’d hoisted myself off the platform, and was standing up in the small room, I had a strong sense someone had been chasing me – someone who didn’t have my best interests at heart.

And what in the heck does all that mean??

I’m having trouble reading, all of a sudden.  There’s never much free time in my life, and even under the best of circumstances it takes far too long for me to finish a book.  But now it’s become completely ridiculous.

I always see people on TV curled up on a windowsill seat, wearing a giant sweater, with one hand wrapped around a huge coffee mug, serenely reading the pages of some great scholarly work.  But that ain’t me.

For one thing, I don’t wear sweaters; they make me itch and look like my grandmother’s couch come to life.  And I don’t perch my big ass on windowsills, either; believe me, nothing good would come from such an exercise.  No, I’m lucky if I can squeeze-out five pages in bed, before I start going all rubbery and looking like Gomer in a gas leak.

Suddenly, however, I can’t manage even five pages.  I fall asleep after a couple of paragraphs, and nothing holds my interest.  Even though I’m completely opposed to such things, I’ve abandoned several books within fifty pages recently, and am just generally floundering around.

It’s disturbing.  I love to read, but just can’t get a rhythm going anymore.

I’m thinking about turning it into a challenge, and possibly attacking The Stand, once and for all.  I bought a copy of it, maybe a year ago, and the thing is huge.  Here’s a photo of me with it, after I got it home.

Perhaps if I turn it into a project, some sort of wager with myself, I can get my shit correct again?  Of course, it’ll likely take me months to read, but if I treat it like a dare of sorts, maybe it’ll make the difference?

Yeah, I’m not sure that’s the correct strategy – it could trigger a perma-lock – but I’m considering it.  Any opinions?

Our dog Andy hates Fritos.  He’ll eat almost literally anything, but lets Fritos fall out the side of his mouth.  He doesn’t like mustard either, or anything that’s come in contact with onions.  Just thought you should know.

I saw this article a few days ago, about the dwindling firefly population.  And that’s sad, I guess, but they’re called lightning bugs.  “Firefly” irritates me, almost as much as “underpants,” and “supper.”

What words bother you like that?  What’s your personal firefly?  Tell us about it, won’t you?

On a semi-related note… it really gets on my nerves when TV weather people use the phrase “cone of uncertainty,” when talking about the projected path of a hurricane.  Is that something they’re supposed to say now?  Was it featured in the weatherman newsletter last month?  FLASH:  cone of uncertainty is the hot new catchphrase this season!  Don’t be left behind, use it today!!

They can all kiss my ass-meat.

And what do you think about TVs in the bedroom?  Toney and I share an opinion that bedrooms should be a sanctuary, free from chaos and noise, and have never considered putting a television in ours.

But the oldest Secret is lobbying for one, since we have an extra in the basement…  We told him it wasn’t going to happen (and it won’t), but Toney and I had a conversation about it recently, and I wonder if our strong opinions on the subject are common?

So what do you say?  Are we alone in this?

And that’s about all the relish I can muster…  I hope everyone remembered to repeatedly flinch today.  I’ll try to start reminding ya’ll on Wednesdays.

We’re going out to dinner tonight, to either Kildare’s or Texas Roadhouse, to belatedly celebrate our anniversary.  And I predict a few adult beverages will fall; I am officially putting every one of them on notice.  Pass the beer nuts.

Tomorrow is an off-day, but I’ll probably update over the weekend sometime.  So check back, my friends.