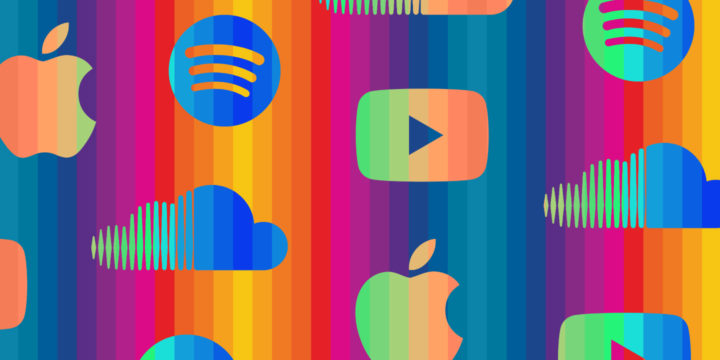 I’ve been around a long time, dating all the way back to the days of the 8-track tape. Indeed, I remember playing the everlovin’ hell out of the second(?!) Foreigner album in that format, when I was in Jr. High. I also had a lot of Beatles music on 8-track, as well as Out of the Blue by ELO. In fact, they’re probably all boxed up and in our basement right now.

But during the 8-track era, I was also buying LPs. I can’t recall how I decided which format to buy. But it was the same thing when cassettes came along, and I would buy an LP when it was something I thought I’d mostly listen to at home. And if it was something built for blasting in the car… I’d go with the cassette. Like 5150 by Van Halen, for instance. Maybe I did the same with 8-tracks? I can’t remember.

In any case, various configurations co-existed in my world for many years. Vinyl LPs were always king with me (I still own hundreds), but I certainly mucked around with the others, as well. The first time I faced an actual dilemma as it pertained to music formats, was when CDs were introduced. Would I now abandon my beloved LPs and take up with the rabid CD cult? This is how it went:

The same pattern played itself out with MP3s (to a lesser degree), and finally with streaming. The one I embraced the least was mp3, but I was a member of eMusic for many years and purchased and downloaded many full-length albums. It was difficult for me to not really own the music, though. It didn’t sit well with me and still doesn’t. I’m programmed for PROCUREMENT, always trying to build the best music library possible. Tiny bits of code on an iPod just felt phony-baloney to me, and not at all legitimate. But, again, I dabbled.

I hated the idea of streaming the moment I heard about it, for the same reason. Hell, in that case, you own even less! And, more importantly, you’re putting yourself under the thumb of Spotify or Apple, or whatever streaming service you’re using. What if they get into some pissing contest with a favorite artist, and all their stuff is removed temporarily, or forever? If you own the CD, it doesn’t matter. But if you’re relying on Spotify, you’re screwed.

But what am I listening to right now? Spotify! I freaking love it. It’s one of the greatest things ever invented. It’s an international database of every song ever recorded, more or less. I still have trouble with it on a philosophical level, but use it daily for its incredible selection and convenience. You’ve got nearly every album in the history of mankind at your fingertips for $7.99 per month, or whatever. It’s fantastic.

Another streaming delight? The Xtra Channels at Sirius/XM. They used to cost extra (xtra), but are now part o’ the regular package. Also fantastic! I put one of those channels on and let it play for hours, sometimes. No commercials… interesting and fun music. It’s great!

So, I have no integrity. That’s what I’m saying, I guess. I start out by taking a righteous stance, then promptly cave. I’d be horrible in a hostage situation. Oh well. I am still buying-up CDs though. I’m constantly filling holes in the physical sound library. However… it feels like we’re on the verge of everything becoming expensive. Over the last six months, I’ve sensed a change. Six months ago you could still buy most like-new used CDs for less than five bucks, but the prices are going up. Soon, it’s going to become a problem. So, if you’re plugging holes, do it now!

I cannot Bluetooth music in my Chevy Cruze, only phone conversations. And I’m not running goddamn cable to hook up my phone. So, no streaming in the car for me.

What do you have on this? Is it all streaming at this point? It bugs me, but I’m part of the problem. Please bring us up to date on it.

And I apologize for being gone so long. I wrote half of this update on Saturday or Sunday, planning to post it on Monday. But the site has been up and down. On Tuesday it was more down than up. But the issue seems to have been rectified now. Yesterday I contacted my hosting company and they miraculously admitted there was a problem with the server. They NEVER do that. So, I considered it a victory of some sort. You know, a victory where my site doesn’t work even though I’m paying a pretty penny to someone to make sure it does? Hey, I’ll take the wins wherever I can get ’em.

I hope you guys have yourselves a fantastic rest of the week.