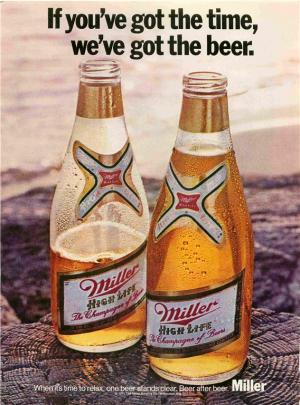 One evening, when I was 16, I walked into Wagner’s Market in Dunbar, and purchased a six-pack of Miller High Life, in bottles. My friends Rocky and Mike were waiting in a car outside, after successfully conning me with a “you look the oldest” line of bullshit.

Beads of sweat were running down the middle of my back as I approached the cashier. I knew I was just minutes away from being arrested, but was now past the point of no return. I put the beer on the counter, and the guy said, “Hey, man!” and proceeded to ring up my purchase. Didn’t even blink.

Relieved and triumphant, I walked back to the car, certain I was about to be received as a conquering hero. But Rocky shouted, “A six-pack? One goddamn six-pack?? Why didn’t you buy twelve?!”

“You do it, asshole,” I said, while climbing into the passenger seat. Wow. This guy was too much. I had no doubt he’d been sitting out there with his engine running, and the transmission in REVERSE, ready to abandon me as soon as he heard the sirens.

But, needless to say, I was back inside the store two minutes later, buying another six. “Um, I probably should just go ahead and grab another one while I’m here,” I said, in a squeaky voice that sounded like it was coming from an 11 year old girl.

This time the cashier eyed me with suspicion. He didn’t say anything, and let me buy the beer, but made it clear I was pushing my luck. “Thank you!” I shouted in my surprising new novelty voice, and got the hell out of there. I think my balls dropped back into place sometime after midnight.

We took our precious cargo to the high school, parked alongside the running track and I had my first taste of beer, as Ace Frehley’s solo album blasted from the speakers. It was super-exciting.

While downing the second bottle, I started to feel a buzz coming on. And I liked it, very much. Halfway through the third one, I shouted, “This is the greatest night ever!” And after we polished off four each, Mike and I were hollering, “Let’s go get some more!!”

But, as difficult as it might seem, Rocky was the voice of reason. He was an old pro at this drinking thing, and convinced us we’d better take it easy the first time out.

We went to a basketball game, in the high school gym, and I felt confident and sure of myself, maybe for the first time ever. Plus, it seemed like we were sitting on a huge secret, which was exhilarating. Of course half the crowd was probably drunk, but we were too naïve to realize it.

It turned out to be the slipperiest of slopes. From that point forward, we drank beer all the time: every night if we could manage it. Things that were previously fun, now seemed quaint and boring. Everything had changed, that night by the track with “the champagne of beers.”

Within three months we could’ve published a booklet called Underage Drinking in the Kanawha Valley: a How-To Guide. We’d done the research, and knew which stores would sell to zitty teenagers, and which wouldn’t. We could’ve even broken it down by specific cashier. Oh, we were quite thorough.

And it was all fun ‘n’ games for about five years, before shit got dark…  But that’s a story for another time.  In the comments section, please tell us about your first beer.  I’m guessing 16 is pretty late for such things, but how many of you actually PURCHASED your first beer?  I bet that’s quite rare.

In any case, if you have anything on this one, please share. And I’ll be back tomorrow.