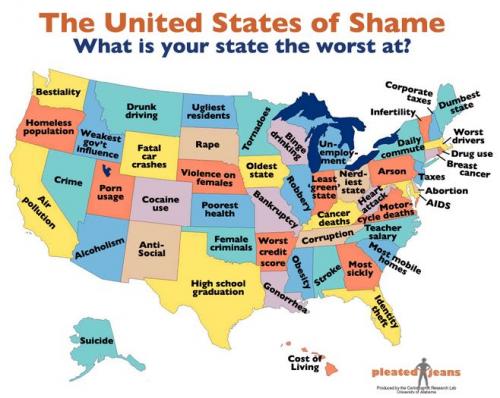 This morning I was trolling for evidence on the internet, and happened upon this dubious article. It purports to list the “statistically worse things about each state.”

My home state of West Virginia, for instance, supposedly has the highest rate of heart attacks in the nation — 6.5 percent of the population. That’s easily verifiable, and legitimate, I suppose. But North Dakota is listed as having the ugliest residents, and Maine the dumbest. As I said, dubious.

However, it’s an interesting piece, and I wish I’d thought of it. Well-played… whoever you people are!

Today I’d like to get your thoughts on this thing. Are you surprised by any of it? Do you call bullshit anywhere? What are your feelings? Here are few of my thoughts, to get the ball rolling:

Ohio is listed as the nerdiest state? Wow. When I was a kid Ohio scared me. We had relatives who lived there, and also visited King’s Island amusement park every summer and took in as many Cincinnati Reds games as possible. And the people — especially the young people — gave me the creeps. It felt like everyone was on drugs and unpredictable, and I’d never seen so many homemade OZZY knuckle tattoos in my life. There’s no shortage of white trash in West Virginia, of course, but it was a different, scarier version in Ohio. Nerdiest?? That one blows me away.

Pennsylvania has the highest rate of arson deaths? That one DOESN’T surprise me. Corruption and insurance fraud should somehow be incorporated into the state seal. I used to work with a guy here who told me he lost his job a few years ago, when a warehouse burned to the ground. “Jewish lightning,” he explained, as if I knew what the hell he was talking about; I’d never heard that phrase in my life. However, every night on the six o’clock news they talk about yet another “suspicious” fire around these parts. It’s bizarre.

Massachusetts has the worst drivers? I haven’t spent enough time there to know if that’s accurate or not. But if it’s worse than Pennsylvania, it must be full-on anarchy. I’m shocked on an almost daily basis by these kielbasa-eaters, and their roadway shenanigans. I don’t think they’re taught the correct ways of doing things. Or they’re taught the wrong ways by belligerent blowhard dads who don’t know any better. Perhaps they’re all just preoccupied with planning their next warehouse fire? I don’t know. But is Massachusetts really the worst? What do you know about this?

Maine is the dumbest state in the union? I’ve never set foot in the place. What’s going on up there? I don’t think I’ve ever been to a place I felt was any dumber than anywhere else. Ya know? It feels like dumb is pretty well evenly-distributed throughout the land. Am I wrong?

I need to go now, but I’m hoping you guys will take it from here. Let’s dissect this thing, and get to the bottom of it. What are your thoughts? Does any of it surprise you, or piss you off? Please tell us about it in the comments.