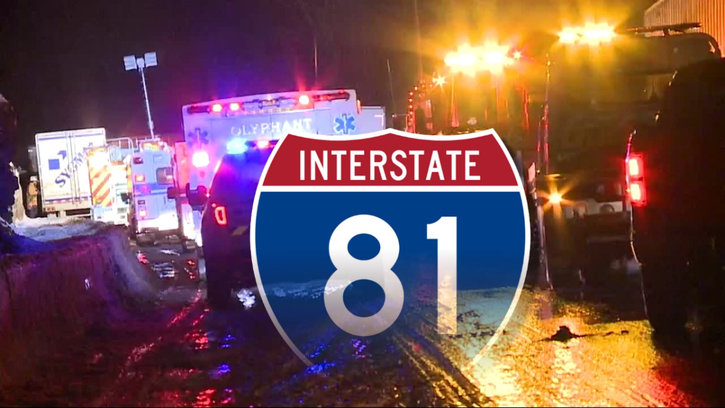 While driving home from work last night, on the Satanic Parkway (I-81), I encountered the following:

Why is it so crazy?? Seriously. There are funky smells along that stretch, like rotting garbage. And goddamn houses going down the interstate (I’m not kidding, houses), along with giant pieces of military equipment that may or may not be nuclear-tipped rockets. Plus, many of the drivers need to be gathered up, like 1942 Japanese folks, and sent to re-education camps. I know you believe it’s where you live, but rest assured… the worst drivers in America live here.

And don’t even get me started on the CONSTANT “construction.” As far as I know, it’s mostly handled by the state, so there’s no incentive to speed things along. If private companies were used more, instead of state workers who are going to get paid the same no matter what, it would likely improve matters a bit. No? Get it done ahead of schedule and we’ll kick in a few thousand dollars more… This is a tried and true method, that might cause an atomic explosion of outrage up here. Hell, they get fired up when they build a new Kohl’s store in this place. Because all change is bad.

A few days ago Steve and I were talking, and he said, “Do you still like living here?” Without hesitation, I answered, “Not really.” I liked raising our kids here, because we live in a quiet and safe neighborhood with great schools. But, that could’ve been duplicated elsewhere.

I don’t really like all the negativity, cynicism, and small thinking. I’ve heard people say things like, “If it’s not in Luzerne County, then I don’t need it!” In a hero’s tone, of course. We’re less than two hours from New York City, and I’ve met lots of folks who’ve never been there. How? Why?! And everything’s a conspiracy. We’re all getting screwed, you see, at every turn. But these people can see right through it. Oh, you can’t get anything past ‘em. They’re way too smart for that.

And I HATE the commute. Did I mention that?

To be fair, I remember eventually disliking the hell out of both Atlanta and Los Angeles, too. For different reasons… but the feeling burned just as hot. The only places I lived that I didn’t learn to hate: Charleston, WV and Greensboro, NC. We often talk about moving back to NC, once the kids are on their feet. You know, unless I get decapitated first by a flying trunk lid.

Do you like where you live? Please share your thoughts in the comments. Also, do you have plans – vague or otherwise – to relocate someday? Tell us all about it.

And I have to go to work now. Wish me luck.