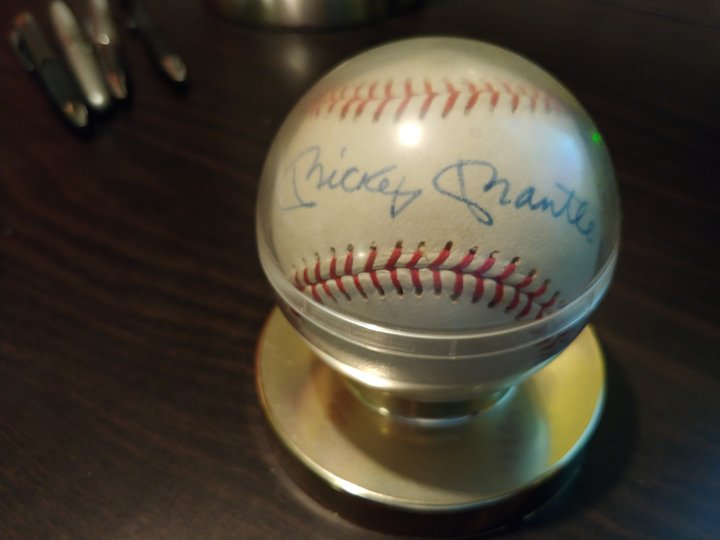 I procured this Mickey Mantle autograph in-person when I was 12 or 13 years old. The retired baseball legend was scheduled to do an appearance at The Diamond, a great old now-defunct department store in Charleston. Super-exciting! So, Steve, my brother and I took a bus up there and joined the sizable crowd with some items we were hoping to have signed. But… tragedy struck. A woman eventually appeared and told everyone that “Mickey is delayed” and would not be arriving for several hours. Please come back later, she urged. Everybody groaned and grumbled and the place cleared out faster than a post-Starbucks rectum. And it didn’t feel like too many of ’em would be coming back.

But we weren’t taking any chances. We quickly decided we’d just wait. It’s the kind of stoopid shit you do when you’re 12 or 13. Indeed, the woman from The Diamond tried to persuade us to leave and return. Nope, we said. We’re staying right here until he arrives. She just shrugged and walked away.

And as you can tell from the photo, The Mick eventually showed up. As he walked through the door it felt like I was seeing some impossible mythological creature, like Zeus or Mannix. I think he was wearing an outlandish 1970s sport coat, and I believe he removed it before sitting down behind the signin’ table. Needless to say, we were first in line and The Diamond lady told Mickey that the three of us had been “waiting for hours.” He grunted and didn’t seem to find that nugget of information to be the least bit interesting.

He signed our stuff without saying much, which was mildly hurtful. You have the interaction pictured in your mind, and it turns out to be something completely different. He was just fulfilling a contractual obligation. I wanted him to be excited to be there, but he was not. And didn’t really try to hide it. Oh well.

The other thing I remember very clearly: his wrists and forearms were enormous. Almost leg-sized. It was crazy.

And I’d have to say that’s my most-prized autograph. Because of the above story, and because he was Mickey freaking Mantle. I mean, seriously. And because it was received in-person, which makes a big difference. Ya know? I have lots of prized autographs, but I’d pick the one above as my most-prized. Do you have autographs? If so, which one do you like the best? Please tell us about it. Use the comments section.