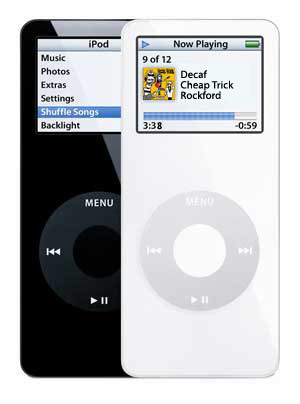 Back in 2001 or 2002 my then-employer gave me an iPod for Christmas.  It was new technology, expensive, and extravagant.  I was shocked, pleasantly so.  It was the 2 gigabyte model, which housed a ludicrous amount of music.  How could it be possible?!  It seemed almost like voodoo.

Of course I have an 80 gig model now, and that original iPod is like a relic from a forgotten era.  But I still use it, almost every day.  I don’t want to take my big honkin’ iPod to work, so I take the small one.  I load it up with old time radio shows, podcasts, and some music.  I also listen to audio books, and that sort of thing.  That second-generation (or whatever) iPod has served me well.

But I think it’s dying.  The battery doesn’t hold a charge for long, and I have to keep plugging it in at work.  Previously, I was able to make it through a whole 10-hour shift, but now I can barely get through an episode of The Adam Carolla Show, without having to take another hit off the charger.

That’s how they die, right?  The battery stops working?  It’s sad, watching the decline.  That thing is an old friend.  We’ve been through a lot together, and now it’s infirm, and will probably fall in the shower soon, and explode a hip.  Then the pneumonia will set in, and it’ll be the end o’ the road.  You know, metaphorically speaking.

It sucks.  Maybe I can get it stuffed, and mounted?  Do you guys know of any good obsolete technology taxidermists?  Any help you can provide will be appreciated.

Do you feel heartbroken when a piece of gadgetry dies?  I get attached to things like that, and it bothers me when they go to that big dresser drawer in the sky.  What about you?  Please tell us about it.

I also feel weird when I trade in a car — even if the car is a giant piece of shit.  I owned a Hyundai Excel years ago, that had been reliable and trustworthy until it passed the 100,000 mile mark.  Then it started falling apart.  Every month, it seemed, I had to put money into it.  Plus, it leaked oil, and caused me all manner of headaches.

But when I traded it for an almost-new Mazda Protege, I felt kinda depressed.  Just for a little while, though.  Maybe an hour or two.  That junker needed to go straight to the crusher, but we had a history.  We’d been partners for a long time.  Ya know?

Same with apartments, and houses.  I get a weird feeling in my gut when I move out of one, even if the new situation is better.

My parents are the exact opposite of this.  They don’t feel a thing.  Not a sentimental bone in their bodies…  They cleaned out my grandmother’s house, after the dementia took hold, and filled a dumpster with her stuff.  I was aghast.  They did save a few odds and ends, and gave them to my brother and me, but they tossed 99% of her stuff.  How??

They also move out of houses, trade cars, and throw away old gadgets without a care in the world.  I don’t understand how this could be possible.  But maybe I’m the weird one?  Anything’s possible, I guess.

What’s your feelings on this subject?  Please tell us about it in the comments.