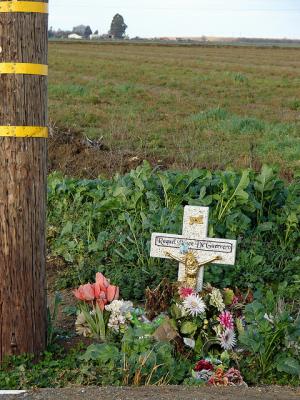 I’m in West Virginia, drinking a Keystone Light from my father’s stash. What of it? Desperate times call for desperate measures.

I arrived at my parents’ house last night, and the drive was long and NOTHING like meditation. The first half was annoying for all the usual reasons: endless road construction, and an inordinate number of so-called wide loads moving at 35 mph. What’s the story, man? Why are there always houses being transported down I-81? And massive propellers, or some shit? Then, as soon as I left the Devil’s Parkway, it started raining and never really stopped. So, good times.

The trip took 9 hours, 15 minutes. I stopped for lunch in some yuppie enclave in Maryland, and enjoyed a #2 combo meal at Chick-fil-A. It was excellent, as usual. I also stopped for gas one other time, and took an additional off-and-on pee break in Fairmont, WV. Someday I’d like to open a chain of high-end rest areas alongside interstates, called Urination Station. The entire business model would be built on pissing. Don’t steal my idea!

As I was driving, I saw a lot of those makeshift memorials, at spots where people had apparently died at some point. Most were sparkly and shiny, with a white cross in the middle. But I saw one that was more elaborate, and possibly maintained by a professional designer. It was fall-themed, with a pumpkin and multi-colored leaves. Fancy! I also saw one on the other end of the spectrum: white spray paint on the trunk of a tree that simply said RIP JOE.

How do you feel about these roadside memorials? If you went sailing off the highway, and roasted alive behind the wheel, would you like for your friends and family to mule a sack of crap they bought at Michael’s or Hobby Lobby out to the exact location, and start doing craft projects? It’s not necessary in my case. I want that to be on the record.

As I was driving along, the suction cups on the GPS gave way, and the whole apparatus fell off the windshield. It hit my fancy stainless steel travel mug, and snapped the handle clean off. That thing cost something like twenty bucks. I was pissed. Now it’s nothing but garbage. Grrr… We can put a man on the sun (or whatever), but we can’t build a suction cup that’ll stay stuck to glass?

And I experienced several cell phone dead spots. Interstate 79 used to be mostly like 1947, but there have been improvements. There’s not 100% coverage, by any stretch of the imagination, but it’s probably 60%. That’s a lot better than the last time I went through there. Maryland has a lot of dead zones, too.

Why is that?! It’s 2013. Am I off the mark in believing all of the so-called lower 48 should be covered by now? I’ll give them a break on Alaska, but the rest of it should be pumping 4G at this point. Am I wrong about that? Sheesh.

I arrived at my folks’ house around 7:30 pm, and my dad made me a West Virginia delicacy for dinner: hot baloney sandwiches. It’s thick slices of bologna, cooked in a spicy barbecue sauce, with lettuce, tomatoes, and onions on a bun. It’s fantastic. Today I saw two businesses near here advertising hot baloney, and I’ve never seen it anywhere but in this area. It’s good stuff, but I can’t get Toney to even CONSIDER trying it. Heh.

I’m going to bed now. Well, maybe after just one more of these horrible beers… I don’t really have a question, so just have a go at the stuff I wrote above.

And I’ll try to write more tomorrow, and maybe post a few photos, as well.