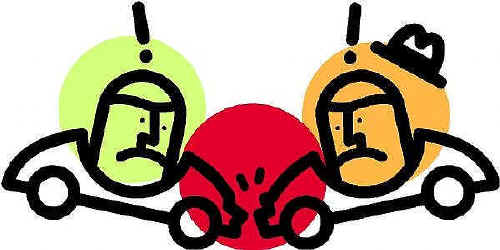 While Toney was cooking dinner on Friday, she asked if I could go to the store and pick up some bread.  Not a problem, I told her, ’cause I was planning to go for Boddington’s anyway.

The younger Secret said he wanted to ride along, undoubtedly betting he’d be able to score a Kit Kat at checkout, and we took off with a Cinderella CD blaring from the speakers.  …That’s right, Cinderella.

And while approaching a small shopping center on the right, I noticed some doucheketeer nosing his way into traffic.  “Stop right there, asslips!” I shouted, and it appeared the guy did as he was told.  It looked like he’d seen us coming, and was now waiting for our car to pass.

However, that wasn’t an accurate reading of the situation.  Oh no.  When we were only about twenty yards from the idiot, he pulled out, right in front of us.  He’d been sitting there for a long time, and waited until a vehicle was UPON HIM before making his move.

And that’s when my almost fourteen year streak came to an abrupt end.  I slammed on the brakes, carefully swerved, and yelled, “What the fuck?!”

I’d never said that word in front of the kids, not once.  Oh, I say plenty, but there’s a line I won’t cross.  And that line begins at fuck.

Of course, neither of our boys are delicate flowers.  They listen to lots of questionable music, and live on a steady diet of Family Guy and South Park.  Plus, you know, both are in middle school.  But I felt kinda bad about it, anyway.  What am I, Sunshine now?  What’s next, a lifetime ban from the Old Country Buffet?

But the boy just chuckled, shrugged, and said, “I don’t care” when I apologized.  And then I bought him one of the big Kit Kats at the grocery store.

If you have kids, is there a line you won’t cross with your language?  Or do you just let it all hang out?  Tell us about it, won’t you?

And since I posted half an update on Sunday, and got a late start with this one… let’s consider it the second half.  How’s that for justifying a weak-ass effort?

In yesterday’s comments you guys started telling us what you ate for breakfast that day, for reasons unknown, so let’s just make it official.  If you’ve got nothing on the subject above, or even if you do, why not tell us what you had for breakfast this morning?  Simple and easy.

For the record, I had nothing but coffee, like on most days.  I almost never eat breakfast, unless Toney makes it on weekends.  I’ve never been able to eat right out of bed… I have to eeeeease into the day.  Usually I just start with lunch.  Or, I’ll have a handful of cookies with my Eight O’Clock coffee.

What about you?  Tell us all about it.

And have a great day, folks.