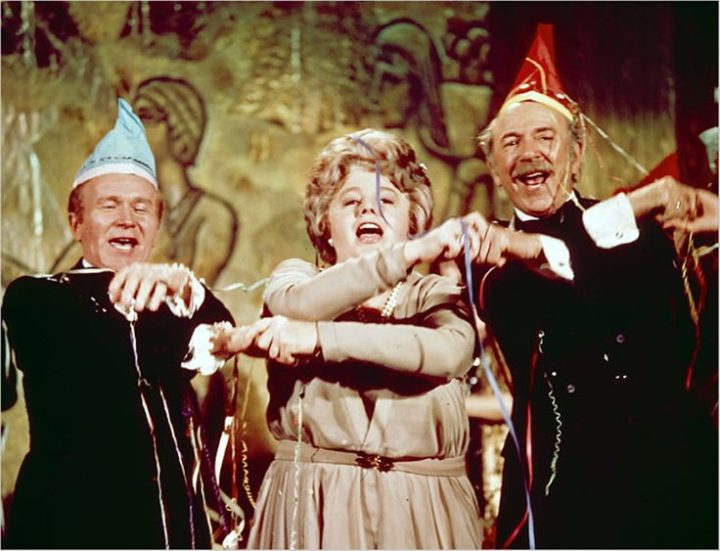 In 1972 I saw The Poseidon Adventure in a theater with my parents and brother. I was nine years old and remember being amazed by the big New Year’s Eve party at the beginning. You know, before the whole goddamn boat went upside-down? Everybody was packed together, blowing horns and wearing novelty hats and swinging for the fences. It seemed impossible to me, and I wondered if I’d ever find myself in such a situation.

Well, about 45 years have now passed and it’s never happened. Not once. I was intrigued when I was a kid (everybody seemed to be having such a good time!), but let’s be serious. If I was mashed into a drunken mob like that, I’d probably have a panic attack and start throwing haymakers. And if anybody honked one of those roll-out whistles near my face, or tried to enlist me in some kind of swaying singalong, I’d be pissed beyond belief. And there would probably be a nauseating stew of odors and aromas out there… It’s not for me. I’m not a good candidate for such a concentrated ration of “fun.”

In fact, I can’t remember a single New Year’s Eve when I wasn’t at home, watching it all on TV. Not even during my 20s when I was especially susceptible to stupid shit. No, I’m generally just sitting there with a few beers in me, watching the glass testicle drop in Times Square. Then all the obnoxiousness almost instantly takes its toll, and I turn the channel to Diners, Drive-Ins, and Dives or somesuch. It’s a holiday tradition.

I’ve been at concerts that were a mob scene, and probably sporting events. But I’m always trying to get a few steps away from the true craziness. I don’t like being in a seething sea of humanity. The whole Times Square thing seems like hell to me. Are all those people pissing into giant diapers or something? How delightful.

What about you? Have you ever found yourself in a Poseidon Adventure-style party? Do they actually happen in real life? I’m skeptical. I think it might be a Hollywood invention.

Please tell us about your most memorable New Year’s Eves. And, if you’re so inclined, what you did last night. Anything exciting? Please use the comments section.

Before I pull the plug on this one, I have a few random notes:

I’ve been watching the Twilight Zone marathon, off and on. I noticed that Rod Serling seemed somewhat abbreviated in a few of the intros, so I looked up his height. Yep, he was 5’4″. Not sure why that interests me, but it does. In any case, ol’ Sawed-Off Serling was a hell of a writer.

It’s been breathtakingly cold here for days. Our storm door was sealed off this morning, to the point where I had to put my shoulder to it, to get it to open. I’ve had enough, and it’s only January 1. Up here it’s still a questionable situation in March. This is bullshit.

On Saturday I had my first post-Andy muffin, and it was sad. It just wasn’t the same without him sitting at my feet, burning holes straight through me with his unblinking stare. That dog could bend spoons with his stare. I miss Black Lips. There’s a border collie-shaped hole in my heart. <Sigh>

I blew the full ass out of two pairs of jeans last week. Two! The second one was one of those situations where, after it happened, it seemed like some fabric was missing. Where’d it go?? I have plenty of jeans to wear but am very particular about the color. I don’t like the dark ones. It feels like I should be wearing a shirt with pearl buttons down the front (and on the pockets), and maybe a bolo tie. I can’t have that. Apparently, I’m going to be buying some new enormo-jeans soon, which will be so far down the wall at Target I’ll have to lie on the floor.

There was some fully-realized douche passing out nut samples at Sam’s Club on Saturday. He had little cups of them lined up, and I grabbed one. But instantly I realized it was mixed nuts, and he had 100% cashews a few inches away. So, I put the mixed ones back and grabbed the cashews. He didn’t say anything, but as I walked away… he took the cup of mixed nuts that I’d touched and dropped them in the trash. I didn’t care for that.

Finally, there were some fireworks going off in the neighborhood last night, and it made me think of this YouTube classic. It’s got to be one of the greatest things ever, right? Right.