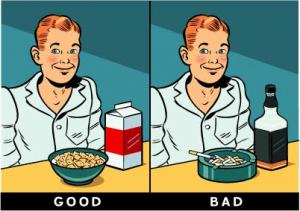 Seriously?  There’s a professional tennis player named Jack Sock?  Check it out.  He’s apparently rising to stardom.  Heh.  Jack Sock.  That’s fantastic.  It sounds like something I’d yell at people in traffic: “Get the hell out of my way, ya jack sock!”  He definitely belongs in the gallery.

I know this might be hard for some of you to believe, but I’m sometimes accused of being far too impatient.  Usually by Toney, but sometimes by superiors at work, as well.  But I think I’m getting a raw deal on it.

A few minutes ago, for instance…  I was down here working on something, after sleeping too long and being short on time.  I was rushing to get it done, and the older boy walked in and said, “Will you take me over to Matt’s house?”  Grrr…

It irritated me, but I was on my best behavior.  You know, since I’m apparently the biggest asshole who’s ever walked.  I’m trying to change that perception, so I said, “Sure, just give me a second.”  No hint of aggravation, or anything of the sort.  I’m really trying.

But that can’t be the end of it.  Oh no.  He can’t just give me the second I requested, and allow me to create the illusion of patience.  He came back in here, almost immediately, and asked for my keys.  Since I was taking so long (roughly one minute had passed), he wanted to put his guitar in the trunk. To cut down on further delays.

“Jesus!” I hollered.  “Can’t you just wait a couple of minutes, until I’m finished with this?  Like I asked??”

So, once again:  The Asshole Riseth.  But is it my fault?  If he’d just gone upstairs and allowed me to get to a stopping point, it would’ve been smoove sailing.  But no, he had to come back at me.  And when he locked my keys in the trunk, it didn’t help matters, either.  Good stuff.

Let me know your opinions on this.  I realize I’m a little tightly-wound these days, but don’t think I’m completely at fault.  What do you think?

And you know what else irritates me?  Email signature files that say “Please excuse any brevity and typos. Sent from my Blackberry (or whatever).”  Quit making excuses and do things the right way, you pretentious cock.  Also:  “Listen closely, as our options have changed.”  No they haven’t.  They’ve been exactly the same since 2008.  Blow me.

I’m already spent.  Holy shit.  I don’t know when I’m going to be able to update again, I’ll be writing about 1981 for the next five days, but I’ll do my best.  They might be posted at weird times, though.

And since this might be up here for a while, I should probably ask a formal Question of the Day, as well.  So, in the comments section, please tell us which comedy legends you don’t think are funny.  I’m talking about celebrities, who society has decided are hilarious, but leave you with no expression on your face, whatsoever. Expect maybe a scowl.

Please don’t list the obvious ones, like Carrot Top.  My blood pressure is in a very volatile state right now.  I’m talking about people like Cheech and Chong.  NOT funny.  Or Charlie Chaplin. Almost as funny as Madeleine Albright.

I have another one that would probably make a few of you gasp, but I’m not fully prepared to reveal it.  I think I need to do more research; my knowledge of him doesn’t run very deep.  As it stands, however, hugely overrated and NOT funny.

So, do with that what you will.  And I’ll be back as soon as possible.