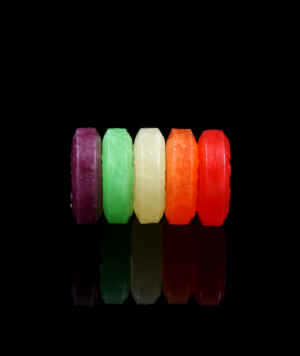 I had some individually-wrapped Lifesavers in my Jack Sack shoulder bag on Friday, and ate three or four of the things while riding on the bus to New York.  And every time I opened one, some guy way up front whipped his head around and glared at me.

I have no idea how he heard it. He was far away from where I was sitting, and a li’l Lifesavers wrapper doesn’t exactly generate a lot of noise.  But there was something about the specific sound waves it was putting off, I guess, which cut through all the bus noise and agitated him.

I paid attention to other sudden sounds, and he didn’t even flinch.  But whenever I’d reach into the European manbag, and put my fingers on an overgrown Lifesaver, he’d turn all the way around in his seat and look straight at me.

It was a bit disconcerting, if you want to know the truth.

“How you doing?” I finally said, but he just stared at me without blinking, and eventually faced forward again.  And I lifted the Lifesaver to my quivering lips, hoping the cellophane wouldn’t betray me and let loose one last crinkle.

Then I decided that, for the time being, I’d had plenty of candy.  There’s no use overdoing it, ya know?

What is the deal with eyebrow threading?  At our mall there’s a little kiosk, right out in the middle of everything, where this curious service is offered.  And there’s ALWAYS a teenage girl reared back in a chair there, having her eyebrows (I presume) …threaded.

What is it?  I could look it up, but I’m a very busy man.  Is it hair removal?  Or some sort of brow-enhancement decoration technique?  And how does it work?  There’s a large Indian woman who works there, and she goes to town with an elaborate network of strings.  One end is in each hand, one is in her mouth, and she’s pulling and tugging and sawing something back and forth.

I mean, seriously.  I assume those strings are somehow insinuated into the girl’s eyebrow hair?  I don’t get it.

Also, there’s a machine out in the middle of the walkway where you can pay three dollars (I think), step inside a clear booth, and experience “hurricane strength winds.”  I watched some kid do it, and his upper lip filled with air and was almost lifted off the floor.

Once again, it’s a service I have no interest in pursuing.  That thing would probably blow the contact lenses out of my eyes, and/or my pants completely off my body.  Heh.

Have you experienced one of those phone boofs of high wind?  How’d it go?

At another mall, possibly in Myrtle Beach, they had a couple of iron lung-looking setups, that you could climb into, and be pummeled by jets of high pressure water.  You were protected by plastic, so you didn’t get wet, but the water would pound you and give you a “massage.”

It looked interesting, but no thanks. For one thing, I wouldn’t enjoy having sheets of heavy plastic suctioned to my body, which had only minutes before been suctioned to someone else.  Blecch.

But I bet it would loosen things up.  Know what I mean?  I’d probably be crapping something I ate in 1979.

Do you have a history with any of these things?  If so, tell us about it, won’t you?  Also, what other strange stuff have you seen at mall kiosks?  They’re often a source of surprising bizarreness.  Use the comments link below.

And before I call it a day, I want to thank everyone who bought shirts recently, or sent in donations.  It’s much appreciated, and I’ll thank you individually by email.  But I wanted to do it here, as well.  So, thanks!

Also, if you haven’t yet registered yourself in our annual (give or take) Surf Report roll call, please do so here.

I haven’t had a chance to go through all the info yet, but I hear we’re — once again — short a Dakota or two.  What the heck, man?  What’s the story?  Is there no laughter in Dakota?  Every… single… time.  I just don’t get it.  Any theories?