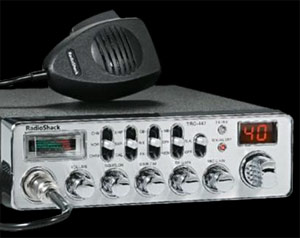 I become irrationally annoyed whenever I see a TV commercial referring to Radio Shack as The Shack. It bothers me on two levels, at least. And I know it’s ridiculous to care so much about something so unimportant, but there you go.

For one thing, I know that some marketing genius somewhere is trying to make Radio Shack seem hip. Radio Shack! There’s nothing hip about it, nothing. They sell bags of fuses, extension cords, Nixon-era TV “aerials,” and Tandy brand CB radios.

I love gadgetry, but can’t stand Radio Shack. Why is that? I don’t know. But one thing’s for sure, I will not be manipulated into believing the place is cool and vibrant and cutting edge, just because they’re shortening their name in some jaunty way.

The Shack. Ha! They can kiss it.

Companies (as well as people) shouldn’t try to create their own nicknames. It has to be organic, it can’t be forced. I mean, even middle-schoolers know it to be true.

I will never drink a Sunny Delight, because of this. They started calling themselves Sunny D, and that was that. The moment I saw the first commercial where they referred to their product in that way, was when it became dead to me. I won’t even let my kids drink it.

UPS is also pushing their luck, with all that “brown” business. I mean, seriously. I’ve heard people say “I’ll be right back, I need to go take a brown.” Why would you want to attach your corporation to such imagery? I wouldn’t.

It’s OK if the nicknames happen naturally, like Mickey D’s or Fed-Ex. Those don’t bother me, because the companies just embraced something that was happening on its own. I can live with that.

But when they try to stuff it down my throat, like “The King of Pop,” (Michael was a corporation, wasn’t he?) I automatically resist. And develop a deep-seated grudge, as well.

What do you think about this? Do you agree with me, or do you think I’m out of my mind? What other companies have invented their own nicknames? Which ones have I forgotten? Are you OK with such shenanigans?

And if you were an advertising executive, how would you hip-up an unhip product? Like, say, Clabber Girl baking powder? What would you do with that? Heh.

And finally, have you ever known a person who suddenly insisted on being called something completely different than what he or she had previously been known? Toney used to have a friend named Alex, who suddenly wanted to be called Alec. That wasn’t his name, but he was adamant about it.

Do you have anything on any of this? If so, use the comments link below.