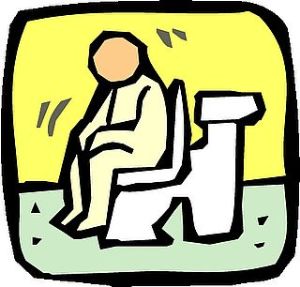 I have friends, as well as a few relatives, who occasionally feel the need to update me on their bowel movements.  I’m not sure how I became the go-to guy for such things, but a good number of people believe I want to know about their remarkable shitventures.  Of course they’re right, but that’s beside the point.

Earlier this week, for instance, someone sent me a series of emails documenting their two-day battle with constipation.  He was actually forced to leave his job, because of it.  Here are a few lines from one of his early messages:

Tuesday afternoon I was walking around with my butthole agape. And I mean stretched open, to the approximate size of an Eisenhower dollar. The turd was at the gate, but would not budge.

He said he spent a half-hour on the toilet at work, twitching and shaking and sweating, with not even a tiny seahorse to show for it.  He had a powerful urge to go, but it felt like there was a jagged sandstone lodged in there.  He was unable to perform his duties at work that day, due to the shit blockage, and went home.

But in the final email there was resolution.  Here’s how it ended:

…funk throughout the house, and a spattered bowl above the water line. I don’t think this is over. It’s only just begun. Thank God for Dulcolax.

I appreciated his grunt-by-grunt account, and it caused me to start thinking… During my entire life there was only one instance when I MIGHT have been constipated. I qualify it, because I’m still not fully convinced.

I was twelve years old, or so, out delivering newspapers. Without warning it was like an invisible man drove a sword through my midsection.  I don’t know if someone was playing with a voodoo doll somewhere, or what.  But it was the kind of pain that takes your breath away.  And by the time I made it to my grandmother’s house I was crying, literally sobbing because it hurt so much.

My granny asked what was wrong, and disappeared into the bathroom.  A few seconds later she came out with a box that looked like it was from the shelf of an 1880s general store.  It was some kind of pill called Black Draught.

“What’s that??” I shouted.  Black Draught?  What in the double-digit hell?!

She swore it would help me, without really answering my question, and I swallowed two of them.  And promptly fell asleep…  Weird stuff, man. When I woke up, the pain was gone, and never returned.

My dad – with great glee – told me that Black Draught is a laxative, and it became an often repeated family story: the day Jeff came home crying because he had a turd caught sideways.  Everybody just laughed and laughed and laughed.  Yes, it’s important to have a strong support network…

But the thing is, I never made any urgent trips to the bathroom.  I never shit myself silly, or anything of the sort.  So, I’m not convinced.  I still don’t know what happened that day, and if those ancient turdbusters had any effect whatsoever. They probably expired in 1947.

And other than that questionable episode… I’ve had no problems with constipation.  Not once.  Coffee and beer and water (three of my favorite things) have a way of keeping stuff moving.  Ya know?

But what about you?  Do you have any experience with a blockage, or laxatives, or anything along those lines? Please tell us about it in the comments.  You know, because I’m the go-to guy for such things.

And it’s great to have this website back, so I can continue to catalog my important works. Heh.