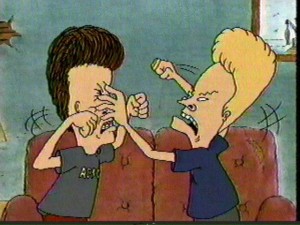 Last night was extra-crazy at work.  And right in the middle of the chaos a great idea for a future update, or something or other, popped into my head.  “Yeah, I need to write that down right now,” I thought to myself.  ‘Cause I have a habit of coming up with good stuff, and completely forgetting it within seven or four minutes.

And you can probably guess what happened.  Yep, I can only recall the excitement, and nothing about what caused it.  The idea (which was really good, and not just kinda good) is gone forever.  I’ll never get it back… they never come back.  And man, that bugs the everlovin’ shit out of me.

I have to be at work early today, for more leadership training.  Today’s topic:  conflict resolution.  They’re supposed to provide us some new tools with which to resolve conflict.  And I have a feeling it won’t include my preferred methods of knocking heads together like Moe, or starting sentences with, “Listen, fuckstick…”  We’ll see.

Thursday is my weekend, so we’re going to put up the Christmas tree tomorrow night.  My assignment:  buy the Sierra Nevada Celebration.  I’m confident I will be able to fulfill my obligations.  I am quite accomplished in the art of purchasing beer, I really am.

Sunny won’t fly, of course.  She’s convinced that every airplane is filled, simply filled, with exploding Arabs.  So that’s out.  Several years ago she traveled by bus, and I guess that was so traumatic, she’s never fully recovered.  I’m not sure why they can’t rent a car, or a van, and drive. They used to make the long drive a couple of times per year.  But that’s also not an option at this point.

So Sunshine and Mumbles come by train.  And since they have no money, Nancy ends up paying for it.  They ask us to contribute, but Toney always says “Ha!” in response.  They should ask me, because I’d undoubtedly be an easier mark.  But Toney has no problem saying “Ha!”

And get this…  Last time they traveled across the country by train on somebody else’s dime, they didn’t care for the lack of privacy and the cramped surroundings.  So, they insisted that Nancy buy them tickets for a private sleeper compartment, or somesuch.  I’m not sure what it’s called, but they have their own bathroom, and a butler or some deal.  I’m unclear, but it reportedly cost a breathtaking amount of money.

“You’re kidding?!” Toney hollered into her cell phone, when she learned of this latest concession.  Apparently they have a man who tends to their every need, and rolls in a cart of food three or four times a day.  I’m laughing, just thinking about it.

But get this…  There was no direct train from Nevada, straight to Nancy’s front door.  It’s shocking but true.  They’d be required to change trains in Chicago, and then continue on to North (or is it South?) Carolina.  But Sunny had a BIG problem with that.  It would require her to put forth a little effort, and make sure they found the new train, etc.

So, the bitching began and Nancy offered to drive to Chicago and pick them up!  From North Carolina!!  So they wouldn’t have to move from one luxurious private room to another luxurious private room.  Completely funded by someone else, for their benefit…  Can you imagine the balls it would require to take someone up on such an offer?

But they did it, and Nancy drove up there (sixteen hours one-way), and brought them back to her house.  And on the return trip they got hammered by a massive snowstorm, which required them to get hotel rooms (on Nancy’s tab) for two nights.  Heh.

Apparently Sunny is being excessively difficult, as well.  Just bitchin’ and complainin’ about everything.  Nancy gave her some spending money (wtf?), and Sunshine kept whining about how cold it was inside Nancy’s van.  So, when they stopped for gas, Sunny bought a sweatshirt (at a convenience store) that cost something like forty bucks.  From the money Nancy gave her…

I guess they’re at Nancy’s house now, and I’ll have a lot more to report in the coming days.  Nancy has already had it, and a giant argument is on the horizon.  And it’s only December 8!  Oh, this is gonna be good.

I need to go now, to learn better ways to resolve conflicts.  Perhaps I’ll learn some techniques that might help us make it through the holidays this year?