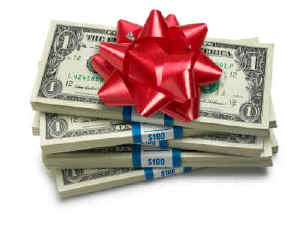 Last night at work we were each given an impossibly-large frozen turkey, and tonight they’re bringing in a catered meal for us.  My employer does a lot of little extra things like that, it’s fairly continuous, and I appreciate it.

Just a couple of weeks ago, in fact, my boss handed me a $50 Olive Garden gift card, for no special reason.  Just a thanks, he said.

Yeah, I realize it’s all part of some corporate strategy, to keep morale high, etc.  But what’s the point of being a cynical pain in the ass complainer all the time?  I just roll with it, and enjoy Root Beer and Pretzel Night, and the Hawaiian Luau, and everything else that comes along.

At tonight’s dinner they’ll undoubtedly give us some candy, and a stack of scratch-off lottery tickets.  They hand out lottery tickets every year, and a woman won thirty grand with one a couple of years ago.

Anyway, while I was making the bed today, I started thinking about the Christmas Bonuses I Have Known.  I feel like I’ve been pretty lucky with the corporate holiday gifts through the years, and also attended a few over-the-top entertainment industry Christmas parties.

So, I thought I’d do a quick recap, as an excuse for an update today, then turn it over to you folks.  What do you say?  Hello?  Well, anyway…

During my Atlanta record weasel years, the company always gave us an extra two weeks’ pay as a holiday bonus.  It usually appeared during the first week of December, and man, nobody was in a bad mood that day.

Two weeks’ pay is pretty generous, when you stop to think about it, and every employee received it.

They also threw a big party, and it usually devolved into drunken debauchery.  I remember a very religious, straitlaced woman on the dance floor one year, drunk off her ass and repeatedly thrusting her midsection at a terrified man from accounting.

It was one of the most mind-blowing things I’ve ever seen.

After we moved to California they started handing out the bonuses in January, for some reason.  It was the beginning of the end…  Ten years later our division of the company didn’t even exist anymore, not really.

But they threw some great parties out there.  One year they rented Six Flags Magic Mountain — the whole place.  And another time they had a full-blown carnival on an old movie lot in Burbank.  They even had elephants there, which the kids could ride.

The coolest part about the carnival was that it was held on the Warner Bros. ranch lot.  Toney and I walked around exploring, with beers in hand, and found a “neighborhood” of familiar houses.  Like the Bewitched house, and the Munster’s place.  Here’s some information.

Man, what a surreal experience, happening upon all that stuff.  I thought someone had spiked our drinks with LSD.

The CEO of our company also invited all home office employees to his Malibu mansion every December, for a spectacular throwdown.

Wow!  You should’ve seen this place.  It was on a hill overlooking the ocean, and was HUGE.  They had valet parking, fortune tellers, wandering magicians, incredible food, and an open bar every few feet.

One of Toney’s good friends was stumbling around drunk one year (white russians), with an unlit cigarette dangling off her lips.  She was going from patio table to patio table, asking people for a light.

When she approached a group of fiftysomething women, one said, “I’m sorry dear, there’s no smoking allowed.”

And Toney’s friend said, “Well, thanks for nothing, bitch!”

Not a wise move.  She was talking to the CEO’s wife, it turned out, and didn’t work for the company much longer.  She applied for a promotion a couple of months later, and was told to not even bother.  Heh.  She turned in her notice the next day.

Another year, when I wasn’t there, two guys were reportedly caught in one of the bedrooms engaging in some sort of gayness.  I’m unclear on specifics, and would like to keep it that way.

After I moved to Scranton I received NOTHING from my employer.  Well, I might’ve been copied on a company-wide email wishing us all a happy holiday.  But there were no kick-ass parties, or bonus checks.  NOTHING was the yearly haul, at that point.

However, I worked closely with one of our sister companies, and they gave me some cool stuff.  Like an iPod during the early days of those things, and a portable DVD player, when they cost about $750.

And that pretty much covers it.  I’m kinda rushed for time here (go figure), so I’ll turn it over to you folks now.

Use the comments link to tell us about Christmas Bonuses You Have Known, and holiday parties, as well.  We want to hear it all.