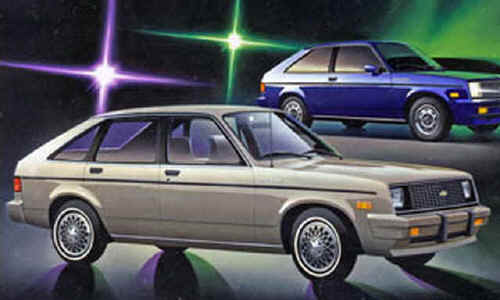 There was a dumpy old house not too far from us, that was recently knocked-down.  Apparently the owners lived out of state, and the town had been trying to pressure them to do something with their abandoned eyesore for a long time.  And nothing happened, predictably enough, until the fines started being levied.

That’s the way I understand it, anyway.  An elderly parent lived there, and left the place to their uninterested kid(s) in Florida, or someplace.  And the kid(s) let it go to fully-realized hell.

But last week they demolished the dump, in just a few hours.  It was amazing.  One day there was a house there, and the next, just a dark spot on the ground.  How can they make a house — a house! — disappear like that?

And during the run-up to demolition, workers found something very interesting in the garage: an almost new thirty-year old Chevy Chevette.  I heard, via my vast network of liars and backstabbers, that it had less than 5000 miles on it.  And it was dusty, but otherwise in showroom condition.

I saw it parked outside the house, and wanted to stop and check it out.  But, of course, I was running late for something or other…  And the next time I went past, the car was gone.

I don’t know why, but I’d love to have something like that.  Sports cars don’t do much for me, but an old, perfectly-preserved Chevette or Pinto would be great.  Could it be restored to working order, without much trouble?  Or would thirty years of inactivity ruin it?  I’m sure the gaskets and whatnot dry-rotted before Reagan left office?

I’m coveting my neighbor’s Chevette, despite what the Bible might say about it.  (Chevettes are mentioned in the Bible. right?)  I love the idea of a new-looking 1970s throwaway car.  I could ride around town, and yell out the window, “Hey good-looking, be back to pick you up later!”

Over the weekend Toney and I were walking around Sam’s, the exclusive club that accepted us as members, and went past a towering display of Sony (I think) DVD players, that cost $34 each.

I believe we paid something like $300 for ours, and the $34 models are undoubtedly a million times better.

In fact, I waited a long time to buy a DVD player, until the prices dropped.  A lot of the executive-suite high-rollers in California paid more than $1000 for their first machines.  It was a prestige thing, to have a DVD player at home, and those guys were into prestige.

I did buy a CD player very early in the game, though, and paid an enormous amount for it.  I think it was around $500, and the thing was a complete piece of shit.  It would skip and go haywire if someone farted in a kitchen three houses down the block.

A couple years later I replaced my $500 player with a far superior $79 model.

Have you ever radically overpaid for electronics — or anything for that matter — because you were an early adopter?  Tell us about it in the comments, won’t you?

Our first computer was around $2500, purchased in 1995 or 1996, and had a 1.2 gigabyte hard drive.  I’m fairly certain our current coffeemaker can store more data…  And my brother bought one of the very first VCRs ever produced in America, I think.  It cost an outrageous sum, weighed something like 200 pounds, and required a water line be attached to the back of it.  My memory is a little foggy on that last part, though…

What about you?  Do you have anything to share on this subject?  If so, please do.

And I need to go to work now.  It’s gonna be a weird one, and I wish I could tell you about it.  I can’t though, on account of the spies… so many spies.