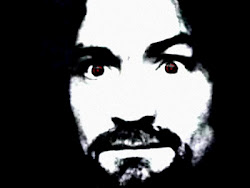 Charles Manson is up for parole again, and I’m kinda hoping they’ll let him out, so he can appear on next season’s Celebrity Apprentice.  Manson, Fonzie, Joe Walsh, Gilbert Gottfried, Jewel, McKenzie Phillips, Tootie etc.

I’m imagining Trump saying, “Charlie, you’re fired.”  And Charlie flying across the conference table, like an agitated spider monkey, and stabbing The Donald in the neck with a Paper Mate FlexGrip.  Great TV!

Alas, it will never happen…  Our stuck-up society will never allow a mass murdering cult leader with a swastika carved into his forehead to be a project manager on Apprentice.  Regardless of how well he might organize a “living window” display at Saks Fifth Avenue.  It’s too bad, really.

I linked to this at Facebook a few days ago, but now it’s all over the place.  Pizza Hut UK has introduced a new pizza with a hot dog hidden inside the crust.  Is it just one big wiener ring, or a series of wieners laid end-to-end?  I’m unclear.

Yeah, you might think I’d like something like this, but you would be wrong.  It sounds fully disgusting.  I’m intrigued by many of the extreme fast food offerings, but not this one.  Blecch.

What do you think?  Would you order this thing?  We need one of our UK readers to give us a review.  Dionne?  Ian?  Anyone else living inside the wiener crust district?   Are you up for such a project?  If so, we’ll need plenty o’ photos.

Admittedly, I have a tendency to get carried away with things…

And speaking of that, an almost-forgotten ancient memory popped into my head yesterday, and I busted out laughing.  This is a little crude, so prepare yourself…

Years ago, during the Greensboro era, Rite-Aid offered video rentals, with a large “adult” section.  I think it cost a dollar per day, but I could be wrong about that.  But I remember you had to ask for the “adult catalog,” and make your selection by number — like at a Chinese restaurant.

“Yes, I’m going to go with #52 today.  Have you had any feedback on it?”  And the disapproving cashier would silently hand over a copy of The Load Warrior, or whatever, and I’d be on my way.

In any case, during one of those VHS epics, an “actress” spoke the following phrase:  “Ohhhhh gawd… I feel like I’m shitting a cock.”  I’m sure you can connect the dots on what was happening onscreen.  And I couldn’t stop laughing for ten minutes.  I kept rewinding it, and watching it again.