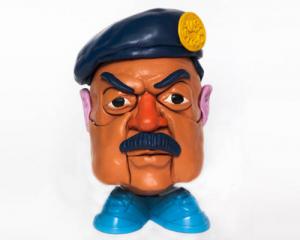 You know how I was complaining yesterday about our car salesman with the poor organizational skills? Well, he called Toney last night and wants us to come back in and sign a paper he forgot. I’m shocked, I tell ya. I might even go so far as to say flabbergasted.

It agitates me, but I guess I’m going to stop in there on my way to work today. I’ll call him and tell him I’m on my way. And I make a pledge to all of you now… If he’s not ready for me, or he’s bouncing around like goddamn Tigger, I’m turning around and leaving.

I’ll grant him a generous seven minute window. If he doesn’t have the document in front of me within that time, I’m gone. I’m not going to get sucked into his kaleidoscopic world of attention deficit caffeine abuse again. Seven minutes! That’s all he’s got.

Man, I’m already whipped-up, and haven’t even left the house.

While I was driving to work yesterday, I was thinking about how I wouldn’t mind being a dictator for a while. Oh, I wouldn’t be one of those horrible guys. There would be no rape rooms, or anything like that. I’d be a kinder, gentler dictator.

However, we’d have to set up a bunch of reeducation camps. And whenever I, or one of my lieutenants, observed questionable behavior, some folks would find themselves on an impromptu “vacation.”

Following too close on the interstate, for instance. That would earn you a week or two at one of our luxurious facilities. Same goes for making unnecessary sounds with your throat or lips, saying “anyhoo” or any of the other words on the quarantine list, and backing into parking spaces.

People who believe that something unfunny suddenly becomes funny when they say it REAL LOUD, might go for six months. And we would probably have to build a special camp for people who are always drumming, and girls who are constantly practicing their cheerleader moves.

Nothing bad would happen while the people were “away.” I want to make that clear. I’m not a monster. It would simply be an opportunity for them to take a good long look at themselves. We’d be helping them. Right?

Sure, we might have to set up an island for the incorrigibles, and remove those people altogether. But they could create their own little society of annoyance and assholery. It’s not like it would be a prison camp. Of course they wouldn’t be allowed to leave, for the rest of their lives, but that’s where the prison comparisons would end.

You guys, of course, would be my lieutenants. Surf Reporters are tuned in, better than most. And I’d like for you to brainstorm this idea today. How can we perfect our future dictatorship? What words and phrases would appear on the quarantine list? How can we make it better for everyone? Help me out, won’t you? Use the comments link below.

And if you don’t realize I’m joking, and are offended by any of this goofiness, start packing your bags. Camp Stick-In-The-Ass awaits.