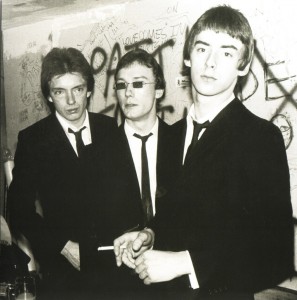 Have you ever blown your nose, taken a quick, stealthy Kleenex inventory, and found something coal black in there?  Well, I have.  And from Thursday evening until last night my sinuses were also swollen and my head disfigured.

A few days ago I joked about looking like the Elephant Man, after receiving a bee sting on the back of the head, and then my face started puffing-up and going in every direction.  I don’t think the gods much enjoy Elephant Man humor…  So, take it from me:  don’t do it.

Clearly, I had some sort of sinus infection and, in addition to my head of horrors, it also dragged my ass down.  I felt drained and out-of-it, and today’s the First Normal Day in quite some time.

Also, with almost no advance warning, we had “visitors” on Saturday and Sunday  It was a quick guerrilla strike of chaos, and mailing list subscribers will get more details on that deal, ASAP.

So yeah, I’ve had better weekends.  I really have.

And speaking of Kleenex…  I use the term generically, but almost never choose that specific brand of disposable snot rag.  Because, I’m convinced, they embed sneezing powder into them.  Whenever I honk into a Kleenex, I immediately launch into a prolonged sneezing jag.  …Then use more Kleenex to clean (kleen) up the mess.

Have any of you noticed this?  Can you confirm my suspicions?  We need to get to the bottom of this outrage!  We have a responsibility to expose the evils of this… this… boogergate!!

On Saturday Toney and I went to Wegman’s to buy a twelve-pack of some sort of fancy-ass microbrew, to accommodate our “visitors.”  And we opted for the Saranac Summer Sampler.  It contained several hoppy ales, as well as a few out-there selections, such as Pomegranate Wheat – which always appeals to the pit-pelt congregation.

And near the coolers was a large display of something called Saranac Pumpkin Ale.  I don’t like novelty shit like that, I won’t drink chocolate beer or candy cane beer or chicken ‘n’ dumplins beer, or anything of the sort.  But Toney was intrigued, so we bought a six-pack.

Blecch.  As far as I can tell, it doesn’t actually contain pumpkin, but rather the spices used to make pumpkin pie.  Like clove and cinnamon and allspice, and stuff like that.  I only took a small sip, and my lower jaw retracted like a cash register drawer being slammed shut.

Toney didn’t really like it either, but the visitors thought it was “delightful,” and all six bottles are now gone.  Heh.

Have you ever tried a really bizarre variety of beer?  Tell us about it, won’t you?

Since Paul Weller’s American “tour” starts tomorrow night, it looks like he’s not going to cancel it this time ’round.  Steve and I have tickets for his show in Philadelphia on Sunday night, and I was mentally prepared for disappointment.

But it’s a little late for cancellations, isn’t it?  Isn’t it??  So, the show might actually happen?  I sure hope so.  The Jam are one of my all-time favorite bands, and Weller’s solo career ain’t too shabby either – and I’ve never seen him play live.

Because I lived in Atlanta, a big city, at exactly the right time of my life, and also worked in the music biz, I’ve had the good fortune of seeing almost all my Bigtime Musical Heroes in concert.  Including Graham Parker, Nick Lowe, Randy Newman, The Kinks, Steely Dan, Nirvana, Warren Zevon, Elvis Costello and the Attractions, The Pogues, The Replacements, and literally hundreds of others.

A few that slipped through the cracks:  The Clash (I saw Big Audio Dynamite twice, but it’s not the same), Wreckless Eric (I actually had a chance to see him, at a hole in the wall in Atlanta, and became paralyzed by laziness and didn’t go!), and all members of the Beatles (McCartney is supposedly ramping up for a two-year “farewell” tour, and I might be tempted to lay down da money).

I also had tickets to see some new band from Seattle, something called Pearl Jam(?!), at a tiny dive in Atlanta.  A guy at work gave me the tickets (I think they were $4 each), and said I HAD to see these guys.  But I opted instead for an evening of alcoholic excess and clumsy sex with a girlfriend.  And so it goes.

So, if Weller actually plays Sunday night, it’ll be a big deal to me.  What musical artists, who were active in your lifetime, would you like to see, but haven’t?

And finally, from the Stealing Clive Bull’s Topics desk:  is there an item (or items) in your kitchen that NEVER gets used?

A lot of Clive’s callers said they own sandwich makers that were used exactly twice, then packed away forever.  Pretty funny, because Toney and I have recently considered buying a sandwich maker; we want to try to recreate a grilled sandwich, called a Gobbler, we used to buy at a restaurant in Atlanta, named Atkins Park.

So, what about you?  Do you own a small appliance, or whatever, that seemed great in the abstract, but you never actually use?  We need to know.