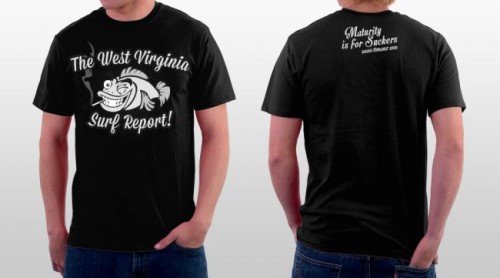 Hello Surf Reporters! This one has been a long time coming. I’ve been working on this daily, for almost two weeks. And now we’re finally ready to go!

A few months ago I began to get the itch to do another WVSR shirt, for summer. I haven’t offered a shirt since 2010, and was feeling the urge to crank up the ol’ Surf Report distribution center again.

After weighing my options, I decided to run a contest at a site called 99Designs. You pledge a certain amount of money there, write a description of what you want, and designers around the world compete for the prize. It requires a lot of interaction with the artists, and turned out to be fun as hell.

If you need some kind of graphic design work done (not just shirts), click through this link and you’ll get $50 off — and they’ll send me $50, too. It’s only good for two weeks, though.

By the end of the process I’d received 132 designs, from 37 designers. Some of them were horrible, a lot were pretty good, and a few were kick-ass. I ended up choosing four finalists, who moved on to the final round. But I couldn’t decide on just one design, and ended up going with two. It kinda broke my heart to reject the other designs, ’cause they were really good. But I’m not Ted Turner here.

You can see the two I chose on this page, and the photos are clickable for a larger view. I love both of ’em. The fish with the beer design somehow captures the essence of TheWVSR perfectly. It was made by some chick in Bulgaria, if you can believe it. 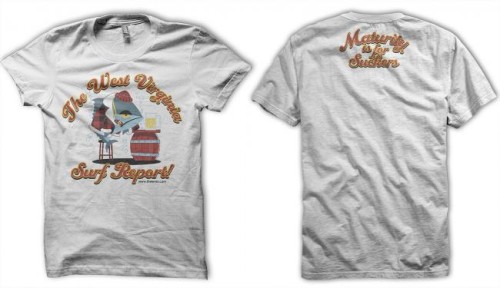 Based on past mistakes, I’ve decided to make this a strictly limited edition deal. Meaning, I’m going to take pre-orders for exactly two weeks, and have that exact number of shirts printed. I will not warehouse anything. I know there are print-on-demand services, but they’re expensive. Doing it this way saves everyone money. This is better for all of us, trust me.

Also, here’s some exciting news: Toney has agreed to take over the order fulfillment on these things. That means that instead of the half-assery of Jeff, you’ll be getting the efficiency of Toney. The shirts will ship as soon as they’re available. No more waiting on me to get my shit together. How cool is that?

These will be high-quality t-shirts, which will last a long time. The same kind of thing we’ve done before. So, please get your orders in before the clock runs out, and within a few weeks we’ll be shipping out the Summer 2013 designs. If all goes well, we might make this an annual event, with new designs every summer.

Thanks, folks!  The pre-order has ended, and your shirts will be shipping soon.