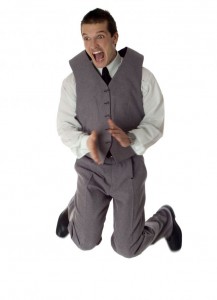 Occasionally, during our sad and seemingly never-ending quest for attention and approval, we’ll clumsily hit upon something that people take a passing interest in.  I know, it shocks us too, but it seems to be true.  Since we can’t take any chances on the world not seeing us at our best (look at me! look at me!!), we’ve decided to make the highlights available in one convenient location.  And you’ve found it, bucko.  Think of it as The Beatles’ 1967-1970 album, without all the songs, charisma, intelligence, and charm.

Alli Side Effects In Layman’s Terms Be sure to carry a suitcase full of brown clothes at all times.

The Woodstock Death Count During an email conversation with a friend, I became curious about the performers at the original Woodstock music festival, and how many were still alive.  When a Google search failed to provide the answer, I realized it was up to me to do the research.  Once again.

The Big Swollen Gallery of Smoking Fish Sightings The Surf Report logo is starting to show up in some unusual places.

The 16 Ugliest Men In The History of Rock ‘n’ Roll In no particular order.

Every Thursday a Theme! Together, we can build a more perfect work week.

Fast Food: Ads vs. Reality Each item was purchased, taken home, and photographed immediately. Nothing was tampered with, run over by a car, or anything of the sort. It is an accurate representation in every case. Shiny, neon-orange, liquefied pump-cheese, and all.

Fast Food: A Celebration!  All our fast food shenanigans, collected together on one handy-dandy page.

People In Newspaper Ads Who Look Like They’re Farting

Sleep Is Creepy It’s as true as the sun coming up in the morning. A national magazine actually offered to pay me money to re-publish this article. And I let them do it.

The Number Of Fucks In Deadwood They said it was impossible to keep track.  We took it as a challenge.

Where Are My Damn Box Scores?? Brad works for a newspaper in North Carolina, and his phone extension is very similar to that of the sports department.

Imagine a Response It’s easy if you try.

“Sweet Sainted Mother of Blanket Jackson!” Favorite quotes pulled from the virtual pages of TheWVSR, by readers of the site.

TheWVSR London Travelogue In March 2008 Jeff and fambly left the good ol’ U.S. of A., and spent a week in London. And he kept impeccable notes.

The Gargoyle Letters One day my friend Chris mentioned casually in an email that he was having problems with his home owners association.  As he explained the trouble I found myself laughing hysterically, and begged him to send me the correspondence he’d had with his neighborhood overlords.  And thus was born an internet classic.

Shoecabbage Teresa Dowlatshahi and David Stanford produce this nationally syndicated comic, and sometimes quote from the cyber-pages of TheWVSR.

Search Engine Phrases Every once in a while I check the stats on this site (OK, every fifteen minutes or so) and my mind is consistently boggled at the “inventiveness” of the human race.

Art House Funnyz With persistence and a bit of trial and error I was able to break the code and create artsy, cool as hell comix, to impress the kids.

Birth of a Donut Shop A Pulitzer-caliber photo essay documenting the erection of a brand new Krispy Kreme store… or something.

Macaroni and Beef I didn’t actually write this but found it in a newsgroup and thought it might be something the readers would enjoy.  My instincts rarely fail me: buffet food, vomit, explosive diarrhea… Yeah, it became a mini-phenomenon.

Wal-Mart Game One of the original pages on this site, lifted wholesale from the final issue of my old paper zine, this continuously generates interesting e-mail and prayers for my soul.

Rules of Thumb Another feature stolen from my paper zine, I think this has been linked by every blog in the world by now, which makes me pretty damn proud.  The line about Zappa has brought several death threats my way, which also makes me proud. The truth hurts, they say.

The Mountain A straight-up collection of links previously proclaimed Further Evidence The End Is Near.

American Stops Washing Hair! Jason Headley decided to stop washing his hair, for reasons that remain unclear, and here is his seven-part report on what transpired.  Warning:  the writing is far superior to anything else you’ll find on this website so please do not become alarmed.

Piazza Payday This nearly made me cry.  I still can’t divulge how I came into possession of this thing, but when I posted it I felt like Dr. Frankenstein, after his monster was on the loose.  Sweet Jesus, what have I done?!  During the first month I think everybody with a computer on Earth, and a few smaller planets as well, accessed this page.  I was scared shitless.  My friends were spinning doomsday prophecies, telling me the hammer of the gods would surely come down upon me.  I’d better start preparing myself to spend a little time in prison for violating The Privacy Of A Met, they shrieked.  It still makes me a little uneasy, if you want to know the truth.

Fast Food Reviews I’ve dedicated my life to doing the research — I do it for you.  Now here’s a mid-term(?!) report.  Two sausage-thumbs up!

White Trash Rap An mp3 of a “song” I used to groove to when I lived in Atlanta.  Dig the percussion!  Supposedly it was originally performed on a public access TV show, at 3 am or something.  One thing’s for sure, I stole it from 99X in Atlanta.

The Rocky Stories I had my first beer with Rocky in 1979, and it all went downhill from there.  Here are but a few “highlights.

As Bachman-Turner Overdrive once proclaimed, these are our greatest hits so far.  Hopefully, unlike that band of fat Canadian stutterers, we’ll have the opportunity to add a few more entries as time marches on.  Check back often, my friends, you ain’t seen n-n-nothin’ yet.