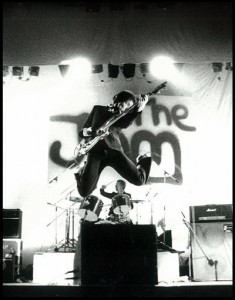 Steve asked if I had a problem with him listening to the Green Bay game on Sunday, while we drove to Philadelphia for the Paul Weller concert.  Then he busted out a Sirius radio receiver, and had it tuned-in before the “o” part of my “no” was completed.

Steve’s been a full-on Packers fanatic as long as I’ve known him, and I’ve known him since, like, third grade.  So we listened to the second half of the game, and he was getting all animated with it.  I was starting to become concerned; I was afraid someone might throw an interception or something, and he’d lose control of himself, grab the steering wheel, and send us rocketing off the turnpike.

But everything worked out OK, the Packers won, and we easily found the neighborhood where the theater was supposedly located.  It’s a place called the Trocadero, which neither of us was familiar with.  Turns out it’s a former vaudeville/burlesque house, dating back to 1870(!).

We pulled into a parking lot nearby, and the guy told me I could leave my car wherever I wanted.  So I parked, and he said he was going to give us a deal and only charge us thirteen dollars.  The regular rate, he claimed, was twenty-eight.

Yeah, I’m not even sure he worked there…

When the concert tickets arrived in the mail, there was also a coupon advertising an Irish pub, called Moriarty’s.  Thirty beers on tap, it said, and only two blocks from the theater.  Sounded good, so we set out in search of it.

We returned to the main street, and realized we were in Chinatown.  Most of the signs were in Chinese, and Steve and I towered over everyone on the sidewalk.  For a few minutes I felt like Wilt Chamberlain, except there wasn’t a need to strap anything to my inner-thigh.

We located the place, and a big roly-poly nerd in a Jam t-shirt (tucked-in) was already standing outside.  It was five o’clock, probably four hours before Weller would take the stage, but the guy was already out there, staring at the building.  TF?

We gave him a sup? lift of the chin, and headed toward the bar.  And two blocks, my ass!  That coupon was a straight-up liar.  It was more like five blocks from the theater, maybe six.  And hurricane Ike had shoved all the hot and humid air from the southern states, right up our tailpipes.  By the time we reached the second block, I looked like I’d recently fallen into a lake.

The bar appeared promising – and popular.  It was packed, and there was a hostess by the front door.  “Do you have a reservation?” she asked.  At a pub?  Oh man, I was getting a bad feeling about this…  I told her we’d just sit at the bar if there wasn’t a table, and she said not to worry, and seated us without delay.

The waiter gave us menus, and we requested he bring us two Boddington’s, as quick as he could fetch ’em.  It was oppressively hot outside, and not much cooler inside.

I ordered shepherd’s pie for dinner, and it turned out to be excellent.  Better, in fact, than the questionable and gristly version I was served in England.

After the Boddington’s I opted for a pint of Flying Fish summer ale, which was also very good.  Then, a Victory Hop Devil.

Our waiter, at one point, said, “So, are you guys going to the show tonight?”  I’d been checking out the clientele, and the Playbills they were carrying, and had a suspicion the theater mentioned on the coupon wasn’t the Trocadero.  This was more of a Broadway-style crowd.

So I asked him which show he was talking about, and he said, “State Fair?”

The hell?  Did this guy think we were a gay couple, out on a date?  State Fair?  Doesn’t that feature show tunes and much sashaying-about?  We straightened him out on the situation, so to speak, but he had no idea who Paul Weller is, and had never heard of The Jam.

A man with a fake leg was sitting at the bar during the Flying Fish segment of the evening.

He was wearing shorts and a plastic leg.  Why shorts?  To keep his remaining leg cool?  I guess that’s valid…  And do they make prosthetics with hair on them?  I think they should; this guy’s was shiny and slick.  Also, do they have different shades, to match-up with skintone?  Do some people buy summer legs, and winter legs, to accommodate tans, and such?

Yes, we got into a lengthy discussion about prosthetics, over adult beverages.  And when the guy got up and left, and was immediately replaced by another man, it was kind of a letdown.  Two legs?  How dull.

We had a good time at Moriarty’s, and I recommend it highly.  Lots of interesting draft beers, atmosphere, and great food…  How can you go wrong?  I submit that you cannot.

We walked around the neighborhood for a while, and ended up in a yuppiefied area.  We started to go into a Borders bookstore but the doors were locked, even though dozens of people were inside.  Apparently they were doing inventory?  Who the hell knows?

We kept walking, and found a Hard Rock Café.  It had already been upwards of thirty minutes since our last beers, so we went inside.  We sat at the bar, my shoulder blade wedged against the corner of a framed Pearl Jam poster, and ordered a couple pints of Sam Adams Oktoberfest.

The beer was good, but the prices were not.  Funk dat!  We walked through their gift shop and urinated in their men’s room (I would’ve preferred cutting out the middleman and just pissing in the gift shop), and bailed out of there.

And right outside the door, on the sidewalk, was a pair of men’s underwear.  We stood and looked at them, wondering how in God’s name such an item could end up in the doorway of a busy downtown restaurant.  Here’s a picture I snapped with my cell phone.

And Steve said, just like he would’ve said when we were fourteen, “I dare you to touch them.”  Yeah, I’ll do a lot of things on a dare, but that ain’t one of ’em…

We returned to the theater, and it’s tiny inside.  And crumbling.  In fact, the ceiling of the main room is covered with a net, to catch falling plaster.  It was like an oven in that bitch, and they only sold beer in the balcony area, which was even hotter.

I had a Yuengling in the rafters, and we staked-out some prime real estate on the main floor downstairs.  Paul Weller… as towering a figure as Springsteen in Europe, playing in a place like this…  And it wasn’t even completely full.

I’ll spare you the musical details, for now.  Maybe I’ll play rock critic, over at Suggestaholic?  Or maybe I won’t.  I mean, I’ve still got a long-overdue Nancy update to write…  Here’s the Philadelphia Inquirer review, for now.

And I’ll leave you today with a few semi-related discussion points.

About fifteen years ago I visited Philadelphia, and it seemed like everyone was abrupt and incredibly rude.  Then I returned a year later, and had a similar experience.  So, Philly became cemented in my mind as The Rudest City in America.

But since that second visit, I’ve been back several times and not had a problem.  My stance on the whole Philly-is-rude thing is starting to weaken.  Perhaps I was too harsh in my original assessment?

And since I’ve never had a problem in New York either, I might actually be left without a Rude City in my arsenal.  Which is kind of a shame…

I’m pretty sure we’ve covered this one before, but what are the world’s rudest big cities, in your opinion?

Also, how do you think that pair of underwear ended up on the sidewalk outside the Hard Rock Café?  Paint me a word-picture that explains such a scenario, won’t you?  Use the comments link below.

And if you have any prosthetics ‘n’ alcohol stories to tell, I’d like to hear those as well.  A longshot, you say?  Well, maybe at other sites…