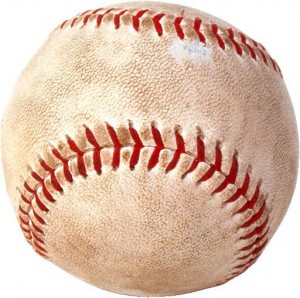 I watched an entire baseball game a few nights ago, Reds vs. Pirates, for the first time this season (I think).  It went into extra innings, the Reds eventually won, and I enjoyed it.  But I have a few comments…

Why do the players now wear their pajama bottoms during games?  Baseball pants aren’t supposed to look like that, and it bothers me.  One guy’s pants legs were so long and baggy they were piled up on top of his shoes.  Aren’t there rules about such things?  Does anything go at this point?  It seems like it could almost be dangerous.

The confusing part:  some players still wear regular uniform bottoms, with the high socks, etc.  But it looks like most just wear their sleeping pants to the stadium.  No consistency, either?  Man, I don’t like it.  What’s next, outfielders sending tweets on their smartphones between pitches?

Who is that tall, skinny stick of a bastard who throws 104 mph?  They said he’s a Cuban defector, and just signed a $30 million contract with the Reds.  He looks like he’s about seventeen years old, and throws harder than Nolan Ryan?  Holy crap nodules.

The announcers said he has a reputation for wildness, but he was throwing nothing but strikes the night I saw him.  And the Pirates hitters couldn’t manage even a foul tip off the guy.  Every pitch was like something fired from a cannon.  If he doesn’t get hurt (a high probability, I’d say), and improves his control, he could be a great one.

How would you like to stand in the batter’s box against that guy?  Scary.  He’d surely destroy a helmet.  And if you were unlucky enough to take one in the ribs, your liver would probably go flying through the backstop.  No thanks.

I enjoyed the game, but was unfamiliar with every single player.  I also didn’t know the announcers, I only knew Dusty Baker.  And how sad is it that I can only relate to the manager?  Everybody else seemed like young whippersnappers, and quite possibly impostors.

I’ve mentioned this before, and I’m gonna mention it again.  I wish MLB would make radio broadcasts available as mp3 downloads, the day after a game is played.  You know, for a nominal fee.  They sell off everything else, why not the radio play-by-play, as well?

If they offered something like that, I’d subscribe and listen at work.  And I’d be an active baseball fan again, within two weeks.  I know I could record them myself, but that’s too big of a hassle.  I just want to pay a fee, and have them dump into iTunes every morning.

I’m sure they’re worried about people pirating the broadcasts and selling them, etc.  But look what that kind of thinking did for the music industry.  I’d love to listen to Reds games at work every night, and it would undoubtedly lead to me going to more baseball stadiums, watching more games on TV, and buying their merchandising crap.  Oh well.  Nobody from the commissioner’s office has asked for my input…

Toney talked to Nancy yesterday, and she said Nossy’s twice-a-week 45 mile commute is “destroying” him.  When he arrives at work, she reports, he has to immediately go to his office, close the door, and take a nap on the floor.  And when he gets home at night, he just goes straight to bed.

Heh.  I can imagine the tortured look on his face as he struggles up the stairs, weak and shaky from driving… 45 miles.  What a rugged individual.  He must surely be descended from the wagon train pioneers of an earlier era.

Nancy is also irritated by an “Asian girl” from the neighborhood, who is now playing with the translucents.  When they “play-act” (wtf?) Harry Potter, you see, the girl wants to be Hermione.  But the oldest see-thru is ALWAYS Hermione, it’s well-known.

So, it bothers Nancy that the girl wants to play the girl part.  This opens up all kinds of discussions about gender roles, etc.  And I might just be a common hick, but I view the whole thing as borderline disturbing.  The oldest kid is in Junior High!  And he’s “play-acting” Hermione?  Good god, man.

And what’s the deal with the Nancys of the world ALWAYS mentioning a person’s race or religion?  I thought that stuff doesn’t matter?  Hell, I barely notice it, and I’m just an unsophisticated clod.  But Nancy is always talking about her African-American friend, and her Muslim colleague, and her Asian neighbors…

I don’t really have a Question for you guys today, so just comment on the stuff above, if you’re so inclined.  You know, baseball and Nancy.

Tomorrow afternoon I’m going to start my three-day yurt extravaganza.  So, it’s gonna get weird(er) around here.  I probably should’ve asked for guest posts, but I didn’t think about it.  I will update on Tuesday, and we’ll see how it goes from there.

Thank you guys, for coming here every day.