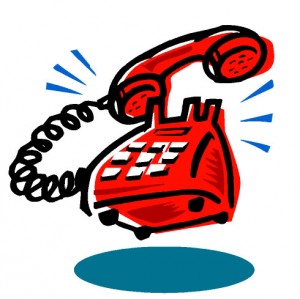 The phone rang this morning at 9:00, a half-hour before my alarm was set to go off.  Afraid that it might be Toney, or one of the schools, I leapt off the platform and ran downstairs to answer it.

And even though it was only thirty minutes lost, it’s going to throw my entire day off.  I get by on the absolute minimum amount of sleep, and any less sends me reeling.  I’ll probably drift off at dinner, and build a drool bridge to my Mrs. Paul’s fish filet.

A few days ago my cell phone rang, and it was somebody calling “on behalf of President Obama,” urging me to refinance my mortgage.  WTF?

What a shitty way to make a living, bothering people in their homes with highly questionable “opportunities.”  I’d be overcome by guilt, if I ever found myself with such a gig.  I wouldn’t be able to do it.

And I REALLY don’t care for them calling my cell phone.  That’s a relatively new development, and it makes something bad even worse.  I’m about to start responding in a Joe Pesci manner.

Anyway, have you ever had a job that you completely sucked at?  Not so much a job that you hated, although you probably hated it as well, but something you’re just not cut out for.

I’ve written about it a few times here, but for roughly two weeks a long time ago, I sold meat and seafood door to door(!?).  And I was the world’s worst salesman.  My heart wasn’t in it, I felt stupid and beaten-down, and just went through the motions.  It sucked so bad I could hardly believe it.

What about you?  Have you ever found yourself in a job that was simply not a good match?  Tell us about it in the comments.

My Thursday:  awakened by a telemarketer, put the finishing touches on a ridiculous mockable, Secrets home from school half-day, oldest boy to the doctor, double ear-infection, aggravation at the pharmacy over something to do with insurance, a too-expensive lunch at Moe’s that the Secrets didn’t finish, the oldest boy to a friend’s house, over to Target to buy a gift card for the youngest boy to give away at a birthday party tonight, this update, the oldest Secret to swim practice, the youngest Secret to the party, Toney tending to her presidential duties, me fending for myself for dinner, pick up younger Secret from party, free-fall onto sofa, crack top on Yuengling, doze off and start building a bridge to the armrest…

You know, in a nutshell.

I’m on the verge of quitting Netflix.  I don’t watch any of the discs anymore, I just pay the subscription fee.  I’ve had Burn After Reading since March 19, and will almost certainly return it unwatched — just like I did with the last disc, after a month or so.  I might try watching King of the Hill from the first episode forward, and see if that takes.  If not, it could be time to cut the cord.

However, I’m still loving eMusic.  It’s one of my favorite things ever.  I spend all my movie-watching time on the site, plotting strategy.  I’ll have fifty more songs to play with on April 23, and will be ready to strike, immediately.

For some reason this made me laugh so hard I had tears in my eyes.  Sleep deprivation?  Perhaps.  But make sure you have your volume turned-up when you play it, to get every little nuance.  Heh.

After I finish here I think I’m going to go for a long walk.  It’s sunny and warmish outside, and I need to get outdoors for a little while.  Holy shit on a handtruck.  I feel like I’m almost completely cut-off from the world.

I might try to find that posh neighborhood that just appeared out of thin air.  Wonder if it’s still there?  It wouldn’t surprise me if I returned to it, and found only thick forest.  It really wouldn’t.

And I’m going to stop right here.  I hope you have a great weekend.

Thanks for reading, guys.  I’ll see you on the other side.

UPDATE:  The walk was excellent, and the posh neighborhood is still there.  I picked out one of the houses, and we will someday live in it.  Also, I went to the beer store and bumped into Poppa Half-Shirt.  He was buying a 30-pack of Michelob Light in cans.  What a predictable douchebox.