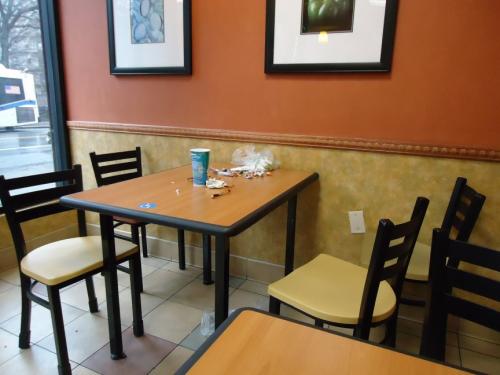 This might come as a shock to a few of you, but I sometimes find myself in a state of agitation.

Stupidity is often the trigger, but there’s not much we can do about it. There’s no antidote for dumbass. It’s been around forever, and is clearly flourishing in modern society. The problem? Idiots are usually the most aggressive and confrontational people around. I guess the theory is that being a colossal asshole diverts everyone’s attention away from the fact they’re really just cannonball-dumb. It doesn’t work, but they’re too stupid to know.

A more egregious violation of the code is people who are oblivious to everything that’s going on around them. There’s not an ounce of consideration for the rest of us. This includes people who stand in front of the ATM and study their receipts before getting their bolt-of-denim asses out of our way. Or folks who get all the way over into the left lane of the interstate and drive at 60 mph.

In most cases, I don’t think those people are being jerks on purpose. I believe they’re just off in their own world, not thinking about us. And that’s a problem. It’s worse than dumb, because it’s a choice. Being gravel-stupid is something that’s probably been passed down from generation to generation. But head-up-the-assism is correctable.

I am always aware of the people around me, and never want to complicate their lives. When I get to the fast food counter I always have my order chambered, and my cash or bank card in-hand. When I’m finished ordering, I move out of the way and make room for the next guy. When I’m buying gas I pump it as quickly as possible, and move on. I’ve seen people pump their gas, and go into the store without first moving their car. That’s a dick move, and is something I would NEVER do.

So yeah, those people infuriate me. But most of the time I don’t think they’re being purposely malicious. They certainly don’t get a pass, but you have to take intention into account.

In a whole different category is our Asshole of the Week: people who leave their fast food trash on the table, and strut on out the door. That’s assholery in its purest form. There’s arrogance involved, lack of consideration, and bald-faced maliciousness. Usually there are also some white trash elements at play, often coupled with ludicrous headwear and aggressive piercings. And sometimes a rambunctious hicklet child, invariably named Colt.

And who are they hurting by their little act of trailer park defiance? Some zit-spangled schlub in a paper hat, that’s who. Bravo! Well-done, my man. You showed the universe who’s boss. You left your dollar menu garbage for some teenager to clean up, at the Kingston Wendy’s! You’re a regular Richard Branson.

Yes, there’s not a hell hot enough for those people, and they’re our Asshole of the Week. I’m always open to suggestions for future installments. Use the comments link below.