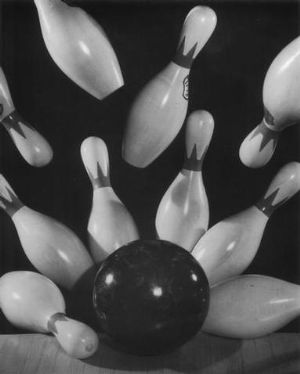 When Nancy was here last week, she said her kids were given cards at school which entitle them to one free game of bowling each weekday during the summer.  “It’s part of the Obama fitness initiative…” she said, in a pleased and knowing tone.

“Yeah, we used to get those cards too,” I said.  “It must have been a Gerald Ford initiative back then?”  Heh.  It’s fun being an asshole.  I enjoy it oh so much.

It’s true, though. Every summer, when I was in grade school and junior high, we’d receive a yellow card that allowed us to bowl one free game per day, at good ol’ Dunbar Lanes.  Actually, I think it could be used at any bowling center in the valley, but we chose to terrorize locally.

We were there every day.  The employees hated us, with reason, but we almost never missed an opportunity for a free game of bowling, and all associated activities.

If I remember correctly, we were required to rent shoes — they weren’t part of the deal — which cost fifty cents.  And we almost always bought stuff from the snack bar, and spent money on the pinball machines, etc. in the back room.  So, they made a bit of money off us.  Apparently not enough, however, to cause the staff to disguise their open-face hatred of us.

On many days the place would be overrun by kids, and the noise was incredible.  There was a lot of asshattery going on, at all times.

For instance, a person would bowl a ball toward the pins, and when it was halfway down the lane one of his friends would push the clear button, causing the gate to come down.  This was a perennial classic…  The ball would crash into the metal, and make a godawful noise.  Occasionally the gate would get bent in the middle, and it was funny every… single… time.

There was a guy who worked there, a grouchy old bastard we called Steamboat (I have no idea why) who would completely lose his shit every time someone would pull the gate-drop stunt.  He’d come bounding out from his wood panel office, and begin screaming and waving his arms around.  It was better than any show in Vegas.

We’d also bowl two or three at a time, which would get ol’ Steamboat worked up, as well.  Three kids, three bowling balls, one lane… all at once.  The ball return system would be thrown into crisis, and we thought that shit was funny too.

I remember one kid would hurl the ball in a giant arc, and it wouldn’t even come down to Earth until it was halfway to the pins.  Then it would bounce the rest of the way.  One time he got carried away, and the ball knocked one of the drop-ceiling tiles loose.  It almost went up inside.  Good stuff.

But one of my favorite activities there was “bowling” in the storage room behind the arcade area.  It was a long room, and was always full of all sorts of junk.  There was crap everywhere.  And, of course, that area was strictly off-limits to us.  There was a big red sign on the door that said EMPLOYEES ONLY.

Ha!  We’d routinely grab a random ball off the rack, swing open the door, bowl it into the darkened room, and wait to see what happened.  Sometimes it would just be a disappointing THUNK!  But occasionally we’d bowl a “strike” and trigger an impossible racket.  One time Bill hit a bunch of fluorescent light bulbs, propped up in a corner.  Man, that was spectacular!

In the so-called arcade, they had one of the earliest video games ever:  Death Race 2000.  The graphics were one step above Pong, but it was great fun.  You were the driver of a car, and the object was to run over as many pedestrians as possible.  Each time you mowed one down, a little white cross would appear where it happened.  At the end, the screen would be filled with crosses.

We had a blast at Dunbar Lanes, taking advantage of the Gerald Ford initiative.  On some days, if you can believe it, we actually bowled and halfway behaved ourselves. I eventually got pretty good at it, because of all the practice.  Not great, but better than most people my age.  It was a lot of fun.

And the hot dogs were fantastic, as well.  Mmmm… I wish I had one right now.  This was in West Virginia, so they put cole slaw on them.  Incredibly good.

As we were leaving there one day, my friend Mike got into an argument with another kid, who was standing twenty or thirty yards away from us.  They were yelling back and forth at each other, and Mike finally removed the sucker from his mouth, threw it at the kid, and it embedded — DEEP — inside his Bobby Brady afro.

I don’t think I’ve ever laughed so hard.  The sucker was sticky and it went way inside his ‘fro.  I laughed so hard my stomach muscles ached for two days.  Have you ever tried to throw a sucker?  It doesn’t work very well, because one end is much heavier than the other.  But Mike somehow had pinpoint accuracy with that thing.

We were hooligans, for sure, but we had a great time.  I have nothing but pleasant memories from my childhood.  And the bowling alley played a big part in our summers.

At one of my previous jobs, inside a manufacturing plant, there was a section of the building that SMELLED like Dunbar Lanes.  Whenever I’d walk through there, on my way to the cafeteria, I’d be transported back to those days.  It was probably some combination of cancer-causing chemicals, but I loved that section of the plant, nonetheless.