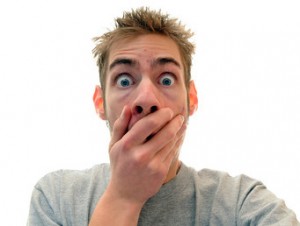 When CROSSROADS ROAD was originally published, I offered 200 free Kindle or Nook copies at a website where book lovers congregate.  In exchange, the folks who accepted them were asked to post an honest review somewhere online.  It could be at Amazon, their personal blog, at the website where the giveaway was organized, or any other place they wanted to write about the novel.

Unfortunately, only about 25 percent of them actually followed through.  Which is fine.  There’s no easy way to police it, and I have little interest in doing so.  I mean, seriously.

But this scheme DID generate quite a few reviews, and I consider it to be a positive experience.

However…  Whenever you make something free, you’re venturing outside your target audience.  All sorts of people (readers of romance novels, and hippie-dippie self-help books, for instance) request a copy.  You know, ’cause it doesn’t cost anything.  And then they read it, recoil in horror, and post the requested review.

So, at the site where all this happened, there are multiple negative reviews of CROSSROADS ROAD — almost all of them fixating on the Sue character.  She’s the fat woman, you might remember, who falls off a toilet in the first chapter.  Some people have a BIG problem with Sue, or more precisely, my portrayal of her.  And everything goes downhill from there.

Most of the reviews at the website are positive, but there are enough negative ones to make me shy away from it.  It’s no fun to see the book savaged, not because the story sucked, or my writing is bad, but because I broke some rule that says people in certain categories must always be portrayed as heroes.  There are no heroes in CROSSROADS ROAD.  Everybody is flawed, without exception.

But, for some reason I checked the site today, after two months or more.  There are about six new reviews, and five are positive.  But one person was deeply offended by the Sue character (of course), AND — are you ready for this? — the fact that I didn’t exhibit proper respect to people in therapy.

I almost dropped a rectal plate.  People in therapy?  I barely even touched on that subject, and anyway… isn’t there a long history of psychiatrist jokes?  Dating all the way back to The Three Stooges, and beyond?  Man, that one floored me.  I knew some people wouldn’t like Sue, even while I was writing the book.  That one wasn’t too hard to predict.  But therapy??  It never even crossed my mind.

In any case, I’m not complaining.  I can live with people being offended, it goes with the territory.  I’m not trafficking in Garrison Keillor-style gentle humor here.  And I kinda get a kick out of it when I’m called sophomoric.  Wow!  Ya think?  No, I’m not whining, I just don’t understand it.

I don’t understand how people can be offended so easily.  Maybe I have a black, black heart, but almost nothing offends me. Some stuff I see on the internet is distasteful and disgusting, and people constantly say things I don’t agree with.  But offended?  I’m not even sure I know what that means.

I used to get irritated when people would repeat stereotypes about West Virginia, but I wouldn’t say I was offended by it.  Frustrated and a little angry is a more accurate description.  But even that doesn’t get me whipped-up anymore.  People have a right to be idiots; it’s in the Bible or the Constitution or something.  I’m too busy to try to micro-manage all the world’s dumbassery.

So, anyway… I was going to write a paragraph or two about this, and it turned into a whole update.  The good news?  I’ll have plenty of extra stuff to write about tomorrow.

Now playing in the bunker
Be offended by Crossroads Road!