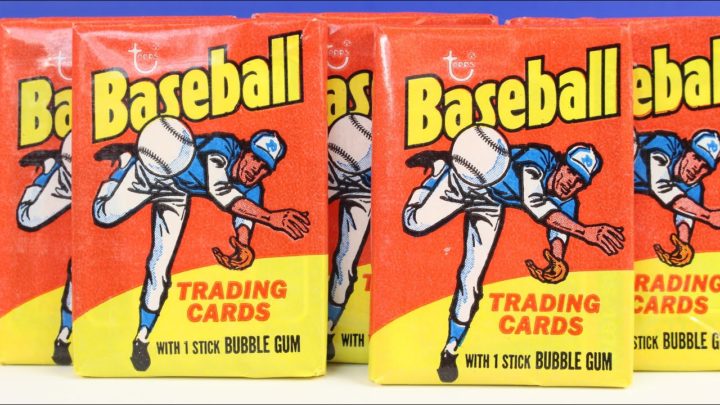 In 1975 I was 12 years old, and obsessed with baseball. During that summer my brother and a couple of friends decided we were each going to attempt to build complete sets of that year’s baseball cards. And we were going to do it the only way we knew how: by buying pack after pack after pack of cards. They went for 15 cents each that year, which is equal to about 75 cents in today’s money.

This became an obsession for me and my friend Steve. Some of the others were less enthusiastic, and a couple dropped out without completing the task. I remember typing, on an old manual typewriter, my own homemade checklist. There were 660 cards in the set, and I sat down and typed in long columns every number between 1 and 660. Then I began marking the numbers off as I purchased more and more packs. 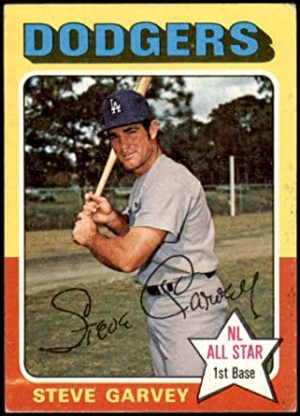 By the time we reached a point where we each only needed thirty or forty cards we could buy many packs and not get any of the ones we needed. Of course we traded with each other and helped one another as best as we could. But there was a time, late in the season, when we were all buying tons of baseball cards and not moving the needle whatsoever. Plus, it felt like every pack I opened included the Los Angeles Dodgers pretty-boy Steve Garvey, and it was maddening. “Not Garvey again!!” I’d scream, standing outside Wagner’s Market, or Bowen’s Pharmacy. We were beginning to panic, because time was running out. And fucking Steve Garvey and his freakish forearms taunted us again and again.

But we powered through and completed our sets without resorting to mail order or anything of the sort. And the weird thing? By the end we weren’t chasing stars, or household names. No, it was obscure sumbitches on teams we didn’t care about. I feel like Topps purposely printed fewer of a handful of random players to take advantage of nerds like us. It was crazy! By the end of the summer I was spending almost all of my paper route money on baseball cards. Indeed, we were buying out all the stores of their entire stock, and would have to ask our parents to take us to neighboring towns to buy cards. At K-Mart and Murphy’s Mart they had these see-through display packs, which hung on pegs. But you could see six cards in each of them: three on the front and three on the back. Man… we plundered those bastards like the addicts we were. If one of your missing cards was visible it was like Christmas morning.

My brother, Steve and I completed our sets. Everybody else quit or came up short. And it was one of the most exciting and enjoyable summers o’ my young childhood. So much fun! Eventually we bought plastic sheets and put the cards into notebooks, and I still love those things. Just looking at them makes me happy deep down. 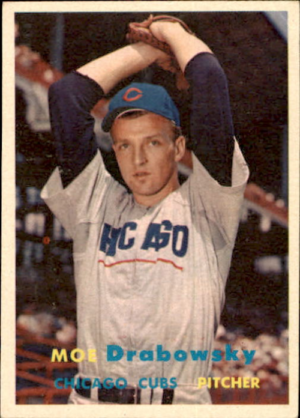 Then it got even crazier. We started buying cards through the mail, participating in auctions and subscribing to magazines about the hobby. The two main mags were Sports Collectors Digest (still around today!) and The Trader Speaks (long gone). I remember early in the process we found out about some outfit in Dearborn, MI, called The Trading Card Company. They had some kind deal where you sent them a small amount of money and they’d send you a random card from a long time ago. The first one I received was for a player I didn’t know — Moe Drabowsky — but it was from 1957. And man, that was like receiving a jolt of electricity. I romanticized the shit out of that card, imagining some kid having it before me, back during the Eisenhower era, and it just blew my mind. So cool! It almost felt like time travel.

And that was how it started. Steve and I went into it full-on. For a few years it’s all I thought about. I was quite literally obsessed. My Dad took my brother and me to a baseball card convention near Cincinnati one year, and I bought a complete set of 1954 Red Man tobacco cards. I occasionally ran display ads in Sports Collectors Digest, at the age of 13 or 14, and was just running wide open on that shit. I used to place ads in the local Penny Saver too, and bought cards off people all around the area. WANTED TO BUY! People couldn’t believe it that somebody would hand them cash for those old cards in the back of the closet. This was before the hobby became so insane. Most people still thought of it as something for kids.

But eventually it did become insane, and I tapped out. Prices went way up, and I couldn’t afford it anymore. Also, I became more interested in beer, music, and girls. Not necessarily in that order. But it was a great run. There’s something primal inside me that still gets very excited by old baseball cards. Just looking at that Drabowsky card, for instance, does something to me.

Did you ever catch the collecting bug? Steve still has it, and never really quit. He travels all over and is still deeply involved in sports collectables. He has an enormous collection. What have you collected? Did you ever reach the point where it was a true obsession? Or was it always fairly casual? Tell us about it, won’t you? Use the comments section.

And I’m calling it a day, my friends. As is the tradition, I’ll now link to the latest podcast episode right here. In it I share a long list of things I’ve never done. Check it out, if you’re so inclined.