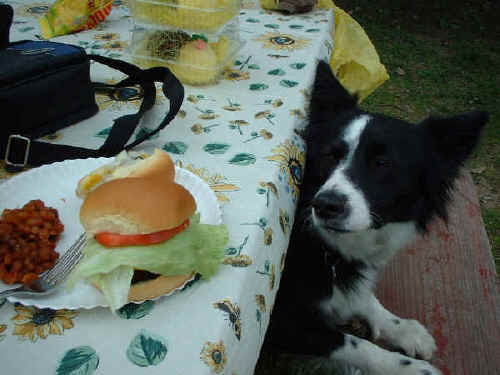 Here’s a breakdown of an average day in the life of Andy (Black Lips Houlihan, Snoop Manny Mann), our border collie with the curious curled tail:

— Sleeps all night on a blanket beside our bed, always with his legs pointed out, his back to the platform.  If I’m working he’ll come downstairs when I get home at 2:15 am, go outside and serve up a piping hot batch of yard crullers, then return to the blanket, sigh, and go back to sleep.

— While Toney is making everybody’s lunches in the morning, he comes downstairs and clickclacks his toenails on the kitchen floor, and attempts to extort lunchmeat from her, using persistence and an unblinking stare that can melt steel.

Sometimes I’m awakened by my wife shouting, “Stop looking at me, you dumbass dog!”

— After the turkey and ham is put away, Andy returns to the bedroom, jumps up on the bed, and gets a couple more hours of shut-eye.  You know, because he’s always exhausted from his busy schedule.

— If there’s no more wrapper-rattling, he’ll sleep near me for an hour or so, and wander downstairs to assume his waiting-for-the-mailman posture.  He sits on a certain corner of the loveseat, way up high like a cat, unmoving and resembling a ceramic doodad.

As Zero Hour approaches (the mail is usually delivered at 10:30 am or thereabouts), our hound turns into a rock-hard, tightly-coiled hunk of tension.  He just sits there… staring out the window… anticipating…

— Then all hell breaks loose.  The hair on Andy’s back sticks straight-up, like a razorback hog, he begins barking and snarling, and threatening to go through the glass.  Then he runs to the front door and starts scratching it with his two front feet.

That last part was added to the repertoire when he spent a couple of weeks with my Mom and Dad in 2008, while we were in England.  My parents’ dog Pepper likes to scratch frantically at a door. Andy obviously appreciated the technique, and has adopted it as well.

— Following the mail delivery (the undisputed highlight of the day) Andy will come to the bunker, and start staring at me.  This means, “Mail’s here, time for me to go outside again!”  Usually he’s quite wound-up at this point, still aglow with delivery personnel fever, so I generally let him run around the backyard for a while.

There’s less trouble out back, you see.  In the front yard he might flip out and “attack” someone who’s walking past our house.  He never bites, but he sure acts like he will.  We’ve tried to break him of this, but all bets are off during “the glow.”

— Then he sleeps on one of the couches until the boys get home from school.  He attempts to extort some of their snacks, using persistence and an unblinking stare that can melt steel.

— During the preparation of dinner he also tries to extort, until Toney or I yell at him to get the hell out of the kitchen.

— And while we’re eating dinner, Andy is always there:  smiling, wagging his tail, trying to charm an entree out of us, and funking the place up with his Pier 39 breath.  Sometimes I can feel my right thigh start to get warm, I smell fish, and know Black Lips is on he case.

The boys usually leave stuff on their plates, and depending on what it is, I’ll scrape it into Andy’s bowl.  He devours it within seconds, and returns for more.

— After dinner we might take the dog for a walk, and he never stops pulling on the leash.  Never.  He pees on everything that’s upright, communicating with his “associates” via pmail, and usually deposits a giant pyramid on High Neck’s lawn.  Which we always clean up, by the way…

— Then he lays around on couches for the rest of the night, sometimes on his back, with his feet sticking straight up in the air.  When Toney goes to bed, he goes up there with her, and flops down on his blanket.

And the cycle starts all over again…  Every day, with few exceptions, for nine years.  I mean, seriously.  The guy doesn’t have any hobbies, he never reads or watches television.  He had a friend at one point, but he’s no longer around… on account of the tumor.

I’d blow my freakin’ brains out.