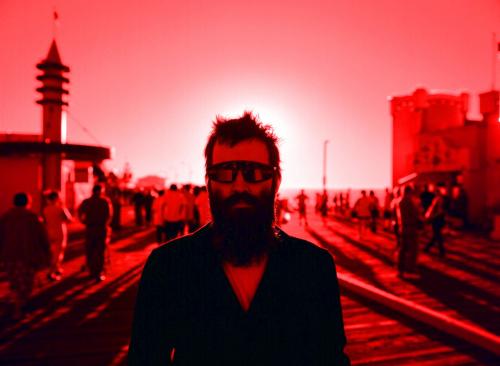 I’ve now seen The Eels play live six times, including an unforgettable show at the Roxy in Los Angeles, which took place moments after their first album was released.  I’m a longtime, enthusiastic fan.

But Saturday’s show in Philadelphia was a special one for me, because I took my kids.  They’ve grown up on the Eels, and have heard their music practically every week of their lives.  It’s as iconic and huge as The Beatles catalog to them.

Last time the band played in Philly, they had the place rocking (as usual), and I wished the boys could’ve been there to witness it.  So, I promised ’em they were going with me next time.  And on Saturday night I made good on that promise.

The older boy had a district championship swim meet, which complicated matters.  It was supposed to be over by 3 o’clock on Saturday afternoon, but I don’t trust that kind of bullshit estimating.  I kept telling Toney that this thing can’t get screwed up.

“Why do you think it’s going to get screwed up?  Why do you always assume the worst?” she asked.

“Because I live in this world!” I answered.

And it nearly happened.  The meet ended at the right time, but he wanted to ride back on the team bus, because the swim season is over, and it was a celebration, etc.  Not liking the sound of that one bit, I reluctantly agreed, and we went home.  I had a bad case of Phantom Ass Syndrome (PAS), from sitting in those bleachers all day.  And I was spinning doomsday prophecies as I navigated I-81 with tingling butt cheeks.

The team bus didn’t leave for another hour, for some reason, and then they decided to stop and have dinner.  I was flipping out.  So Toney went back and got him, at the restaurant — about 20 miles away from us.  He had to shower, and shove some Burger King down his neck, and we didn’t leave until about 5:00.

I didn’t want to ruin the evening, so I was suppressing an urge to go completely wild.  I knew it!  Goddamn chaos: it’s as predictable as a post-Sunkist soda assplosion.

But we made it.  There was a lot of traffic, which was making me grind my molars.  But Steve, the boys, and I picked up our tickets at will-call around 7:45.  The girl at the merch table said The Eels were going to go on at 9:15 sharp, so we decided to grab some dinner at an Irish pub, down the street.

It was so dark in that place, with the mood lighting and all, I couldn’t read the menu.  Still in a state of semi-agitation, I bitched and complained about it, until the waitress wanted to crash a boiler pan over my head.  Yes, I’m an old bastard, what of it?

I asked her what beers they had on tap, and she said, “We have, like, 25.”  Which meant she didn’t want to recite the list to me.  But if they’re going to insist on it being so coal mine-like in there, better get to recitin’, bitch.

The beer was good (Dogfish Head 60), and so was the food (some kind of chicken sandwich).  And we got to the show as the final opening act finished her set.

I think the boys were surprised at the size of the venue.  They were expecting a big theater, and World Cafe Live only holds 600 people.  The show was sold-out, but it’s not a giant room.  We found a spot not far from the stage, and excitement was in the air.

Finally, the lights went out, and the voice of an old lady came booming from the speakers (already with the weirdness):  “Welcome!  You’ve made a wonderful entertainment decision tonight.  The Eels put on one heckuva show.  So, get ready!  Strap yourselves in… and hang onto your hats!!”

The lights came up, there was an avalanche of guitars, and it was pure awesomeness.  The Eels are sometimes dark and somber on their albums, but the shows are always a party.

Mark Everett, aka E, is hilarious, and makes plenty of biting comments between songs.  And the songs are all rocked-up and roaring.  He was almost scary during “Tremendous Dynamite.”  The dude was howling, and had a look of pure menace on his face.  I was about to shit myself with happiness.

They played for a long time, did two covers (“Oh Well” by Fleetwood Mac, and “Itchycoo Park” by Small Faces), and came out for two generous encores.  Then they said goodnight, and the house lights came on.  Great show!

But I’d read a review of one of their previous concerts, and it said the band sometimes comes out for a surprise third encore on this tour, after the theater has almost cleared out.  So, we stuck around, hoping for the best.

And it happened.  There were about 30 or 40 of us still hanging around, when the Eels returned, and E yelled, “We’re not finished!”  They started rocking the shit out of the place again, and a large frowning clown was onstage for some reason, just milling around and interfering with the band members.  Then a monkey-woman in a prom dress was there, and it was getting really, really strange.  The older boy snapped this photo: 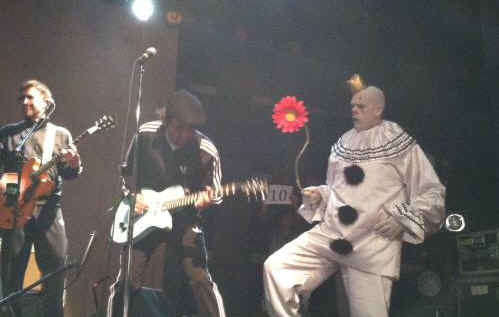 They finished with some kind of thrashing ridiculousness, possibly called “Go, Eels!”  That was the chorus, anyway.  Heh.  Then E said, “That’s it, go home.”  And thus ended a fantastic night.

For the record, the Secrets were blown away.  I don’t think they were fully prepared — which is exactly what I was hoping for.

I’ll get back to the normal stuff tomorrow.

See ya then, my friends!