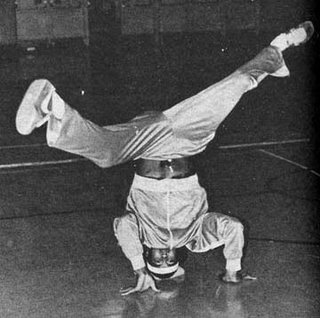 Yeah, all I can say is… 7 am is too early.  I climbed atop the dormancy platform at 3:30 this morning, and the sawing, grinding, and nasal profanity kicked-off at 7:00.  I could put a full eggplant in each of the bags under my eyes…

In fact, they’re still going to town out there, hours later.  What the hell, man?  It seems improbable, but I’m fairly certain Ernest T. Bass is involved.

On Saturday we went to the white trash jamboree commonly known as a “flea market.”  Our oldest wanted to buy a pocket knife, and couldn’t find anything he liked at Wal-Market or Dick’s (heh).  So we briefly submerged ourselves in the land of hyper-extended tube tops, skin grafts, and terrifying coughing jags.

The Secret bought his knife, and we lectured him about it all the way to the car.  Toney:  “One wrong move, and that thing will be mine — forever.”  And Toney’s not known for her empty threats.

As we were exiting the parking lot, I noticed something odd in my peripheral vision.  It seemed like someone had just gone balls-over-tits between a minivan and a 1974 Plymouth Scamp with one aquamarine door.

What the?  I turned and saw two old people (and I mean old) in a tangled mess on the blacktop.  It was a wriggling pile of wrinkled skin, with two feet bicycling straight-up.

I slammed my car into park, and went running.  “Do you folks need some help?” I yelled, before reaching the oldster heap.  “Help me!  Oh god, heeeelp!!” a gravelly female voice answered.

She’d previously been seated in a wheelchair, it appeared, and it looked like her husband had fallen across her for some reason.  They were all tangled up, and the woman’s face was mashed flat on the pavement, her mouth all distorted like Buddy Hackett’s.

The old man, who had military tattoos on his forearms, extracted himself from the mess, and I hoisted the woman and wheelchair back to their preferred positions.  It didn’t take much effort, because she only seemed to weigh about sixty pounds.

They both said they were OK, and the man appeared to be more embarrassed than anything.  He’d probably fought in WWII, kicked ass all his life… and now this indignity.  He said he’d twisted his ankle on something, and fallen on his wife.

I asked if they were hurt, about three more times, and finally left.  I could tell he just wanted me to leave them alone, so I did.

I felt bad for both of ’em, but especially him, for some reason.  When he got out of bed that morning, I bet he had no idea he’d be break-dancing in a flea market parking lot later in the day.  I mean, that dude was fully-inverted.

Do you have any Good Samaritan stories to tell?  How’d it turn out?  Use the comments link below.

Also, why are you not allowed to take pictures inside a flea market?  Every time I go to one (it’s quite rare) there are signs everywhere that warn me not to take photographs.  What’s that all about?  Is it because half of the vendors, and two-thirds of the customers, are on the run from the law?  What do you think?

My inner-sensors are telling me the retro Smoking Fish shirts will be available soon.  I haven’t heard from the T-Shirt Lady yet, but have a feeling they’ll be ready by week’s end.  I ordered about ten extra of both XL and 2X, so if you want one, don’t delay.  This really is a limited edition, as opposed to “limited edition.”

Three excellent links received via the Surf Report email box today:  this one, this one, and this one.

Great stuff!  Thanks folks, as always.

And I’ll bring this mess to an end with a questionable Question:  Do you ever order food off the internet?

I sometimes buy British candy through Amazon, but that’s about it.  Oh, and when we first moved to California from Atlanta years ago, and were feeling homesick (homesick!), we found a website that sold Vidalia onions.  They’re a Georgia delicacy, and we wanted some, dammit.

I can’t remember how much it cost, but it was a lot, for very little.  The box only contained about six onions, and the California agriculture people confiscated at least two.  So, we got four onions, for something like twenty bucks.  It was outrageous.

And the punchline?  A few days later we were in Costco, and saw a massive floor display of Vidalia onions, for something like 89 cents per pound.  I almost dropped a rectal plate.

So, if you’ve got anything on mail-order food, bring us up to date on it.