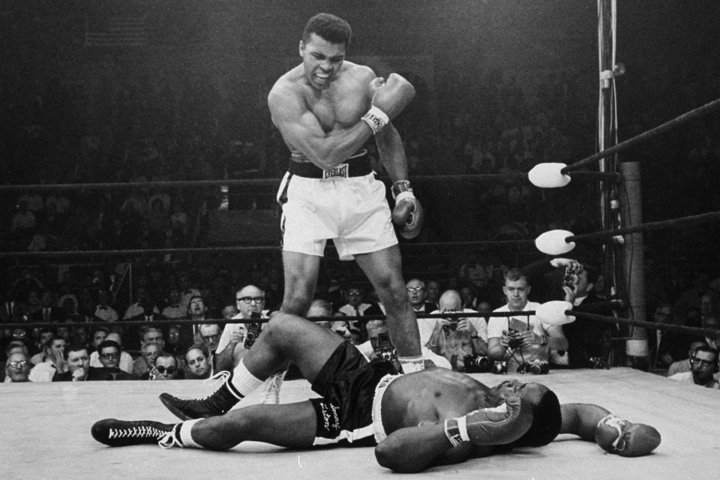 I don’t know if you guys are aware of this, because it’s a fairly obscure fact, but Muhammad Ali was sometimes known as “the greatest.” Is that something you were hip to?

Holy mackerel! I don’t even watch much TV, and was totally burned out by the perma-repeat coverage of Ali’s death by Saturday afternoon. I don’t begrudge the level of tribute – he was a cultural icon and most famous person in the world at one time – but the way it’s being done causes my molars to grind.

For one thing… Can’t they come up with more than four or five clips of the man? There must be millions of hours of footage, right? Why the same things over and over again? It’s maddening.

Also, I don’t take too kindly to being schooled on the life of Muhammad Ali by a bunch of whistle-dicks who were probably born in 1994, and likely have only a vague notion of who he was. In fact, I’d bet money several of them had to do one final check on the correct pronunciation of his name, right before the cameras went live. And then they go on the air talking all authoritatively ‘n’ shit. “Ali was more than just a boxer…” Oh really? Who knew? Why don’t you go fuck yourself, Michael or Jessica or Christopher or Ashley.

And enough with “the greatest.” Everybody is aware that he called himself that, so you’re not providing any new information. And you’re not being clever, literary, or dramatic, either. It’s a giant cliché. So, knock it off already.

You know, it’s the phoniness that gets to me. Holden Caulfield was right. It’s why I get so agitated every time I look at Facebook, attend a meeting, or hobnob with the neighbors at a block party. I can handle a lot of things, but phoniness isn’t one of them. I feel like 75% of the population is performing at this point. Am I wrong?

Do you think I need counseling, or is this just an inevitable case of Get Off My Lawn-ism?

But anyway… I thought I’d take this opportunity to share my Muhammad Ali story. I’m surprised a local news crew hasn’t been here yet, to let me tell it live on the air. Oh, it’s a humdinger. (First time I’ve used that word on TheWVSR in 15 years? It’s possible.)

When I worked at the Dunbar Exxon, setting of A Convenience Story, Ali stopped in one afternoon. He and a group of folks were traveling on Interstate 64 in a Winnebago, or something similar, and bought gas from our humble emporium of snacks ‘n’ debauchery. He came into the store, and was very friendly. He spent time signing autographs and joking around with the customers and staff. Oh, it was a memorable day for everyone involved.

Unfortunately, I worked nights and wasn’t there when he came in. I never met the man. The end.

I’ll be back on Thursday, unless another celebrity dies between now and then, and the pressure becomes too much for me to handle. Am I the only one? Please tell me I’m not the only one.