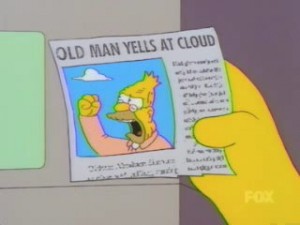 I apologize for the No Update Wednesday this week.  I’m going to try to keep it to a minimum, but there might be a few more missed days than usual for the next month or so.  Lotsa shit going on…

First on the list:  a hard deadline for my “book” is fast approaching.  I need to have it completely finished and ready to hand over to the formatter on March 1.  That means I only have about two more weeks to tweak and make changes.  It’s completely terrifying.

Once she has it, and starts working her formatting magic, I can’t do anything else with it.  It’ll no longer be a work in process, it’ll be “completed.”  Whether or not it’s actually completed doesn’t really matter at that point.  So, I’m stressing a little.  Please be patient as I buckle under the pressure and crap myself with abandon.

And speaking of self-publishing a first novel, please read my interview with C.D. Payne, author of Youth in Revolt, at CrossroadsRoad.

I’d like to do plenty of interviews for that site, and have a list of people I’m planning to harass via email.  C.D. was at the top of that list because his first novel is freaking hilarious, and he wasn’t able to find a publisher for it in the beginning.  These are things that interest me…  I appreciate him taking the time to answer my questions, and hope you guys enjoy it as well.

There’s a woman who sits near me at work who plays the worst songs ever recorded through her computer speakers.  I don’t know if she bought a box set (K-Tel’s Audio Butt Turds volumes 1-4?), or what.  But it’s all breathtakingly bad, and causes me to grind my teeth.

I usually don’t say anything, unless the volume is too high.  She gooses it a little here and there, to see how far she can push it.  And I eventually have to tell her to turn it down.  But I don’t generally say anything about her song selection, even though it makes me want to start ripping wires from the wall.

She plays a bizarre mixture of horrible dance music (all featuring computer distortion of the vocals like Johnny Bravo), godawful commercial country (I hate country music that’s played on the radio worse than Hitler), and shitty oldies (like “Gypsies, Tramps, and Thieves”).

And when one of those current pop songs/dance tunes is playing, I find myself going fully rigid with aggravation, and thinking, “That’s not music, that’s just noise!”  Like some old man shaking his fist on his front lawn.  And even though I KNOW my assessment is correct, it concerns me that I’m starting to display old codger tendencies.

So, I started thinking about other things that might indicate a slide toward yellow slacks and The History Channel, and there are a few alarming developments:

And now I’d like to know that I’m not alone here.  In the comments section, please tell us about the signs of aging that you’re seeing.  I know some of you are young whipper-snappers, but maybe you’ve noticed something too?  I have a feeling it’s a long, slow decline.  Heh.