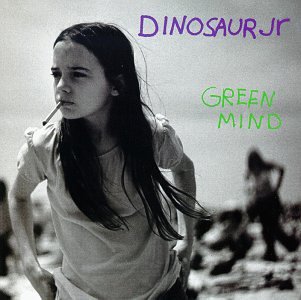 Last night I listened to Marc Maron’s interview with Lou Barlow, of Dinosaur Jr., Sebadoh, and Folk Implosion semi-fame. I love Lou, and have listened to some of the Sebadoh albums almost as often as the classic Dinosaur records.

There was a lot of discussion in the interview about what led to Lou being fired from Dinosaur Jr. in 1988 or 89. After he left, the band continued on and released a great album called Green Mind. And I played the shit outta that thing.

And, for reasons I cannot explain, that particular record has the power to transport me, more than just about any in the massive Surf Report sound library. It only takes two or three notes, and my insides are boiling over with the same bad juju I was experiencing at the time. Good god, it’s powerful.

I was living in Atlanta, on Bonaventure Avenue, in the upstairs/front apartment of an old house. The apartment wasn’t bad, but the neighborhood was a toilet. There were derelicts everywhere, crime was rampant, and you’d better watch yer ass if you walked around that place after dark.

I’d moved down there with my girlfriend, but we broke up. I was, as they say, in a bad place. I was impossible to deal with, and about to come out of my skin.

She had some friends from work, and I refused to give them the time of day. I was impatient and perpetually agitated, and viewed the new friends as both pretentious and ridiculous. They seemed like paint-by-numbers hipsters to me: tolerant of all the right things, outraged by the things they were supposed to be outraged by: oh so correct in every way.

And they ate unusual foods, just so they could brag about it. Or so I believed. I remember we were having dinner there one night and I looked down at my plate of eucalyptus leaves or whatever, and said, “So, do you people ever just have, like, pot roast?”

But mostly I didn’t say anything to them. I was a dick and, of course, it had way more to do with me, than them. Finally, my girlfriend couldn’t put up with my bullshit anymore, and moved out.

After I lost that anchor, it was not pretty. I had a good job at WEA, but was always worried I’d lose it. It was still early days, and I thought they’d soon learn I was a fraud, and send me packing. And when I got off from work, I filled my evenings with great quantities of alcohol, and watching obscure bands play in clubs.

On my way home from my job I’d stop at the liquor store outside the so-called Disco Kroger, and buy a 12-pack of some swill with bottle openers built into the bottom of each bottle. I can’t remember what it was called, but it was cheap rotgut beer. Then I’d go to Tortilla’s and buy a Nerf football-sized “super burrito.” Every day.

Then I’d either drink myself into oblivion, or have a few beers and hit the town. I saw hundreds of shows, four or five or six every week. I also spent an inordinate amount of time at Manuel’s Tavern, one step away from the wacky shack the whole time.

At some point I decided I needed a new girlfriend, and began “dating.” I’d had two long-term relationships at that point, and had never really experienced the dating phenomenon. And it sucked ass.

When it came to asking women out, I had a surprisingly good batting average. But, it was usually a demoralizing affair. I could always tell, within ten minutes, it wasn’t going to work, and went out on a lot of first dates. I’d tell the women I’d call ’em, and throw their numbers away. Again, it was more about me, than them.

It was a year (or so) of great upheaval, and craziness. I probably could’ve benefited from some time on the psychiatrist couch; I was a goddamn mess. I don’t know why, but I was always anxious, and felt ready to explode. Not in violence, just literally an explosion, due to a build-up of pressure in my soul.

And during the whole time, I listened to that Dinosaur Jr. album… It was the soundtrack of that whole dark era. It’s one of my favorite records, yet I hate to hear it.

If you have any similar relationships with an album, or a TV show, or whatever the hell… please tell us about it in the comments section below.