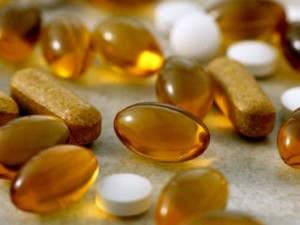 Yesterday Toney was cleaning the living room, removed one of the cushions on the loveseat, and unearthed a surprise that almost caused her to vomit into a candy dish.

I wasn’t home at the time (unfortunately), so I didn’t witness all the retching and dry-heaving, but I guess it was quite a scene.  She said the boys came running from the family room, with wide eyes of concern.

Apparently the younger Secret doesn’t like the taste of the vitamins Toney’s been giving him every morning, and has been stashing them under the cushion.  She said there must’ve been thirty of the things, many were stuck together or mashed into the fabric, and the whole thing was putting off an impossible funk.

Vitamins don’t smell very good under normal circumstances, but I guess it gets much worse with time and compression?  Heh.

When I got home from work last night, there was practically a POLICE LINE-DO NOT CROSS barrier around loveseat, and the thing has reportedly been doused in many chemicals, aired-out, then doused again.  I’ll be afraid to sit there… it might eat away my ass casing.

Toney was pretty pissed about the whole thing, but I’m able to, you know, see the humor in it.  Of course, I wasn’t the one who almost vomited halfway up the living room wall…  I imagine that kind of thing might affect your perception a bit.  Ya know?

While I was driving home from work last night (around 2 am) I started smelling smoke, strongly.  For a split-second I wondered if my car was on fire, I didn’t realize it, and just continued to drive.  But it smelled more like wood burning, so I almost instantly relaxed my hyper-cinched sphincter.

Then I went past Montage Mountain (a so-called ski resort) and noticed cars pulled alongside the road.  Oh shit, I thought, there must be an accident.  And isn’t that fantastic?  Why can’t people have the decency to decapitate themselves, or become engulfed in a rolling ball of fire, when I don’t need to use the interstate?

But when I went around the big swooping corner, I saw something that blew my freakin’ mind.  The whole mountain was on fire.  At least that’s the way it looked, in the middle of the night.  There were flames everywhere, across a huge area.  I had trouble processing what I was seeing.

People were pulled over on I-81, out of their cars, and snapping photos.  I almost hit one of the vehicles, because I was rubber-necking and muttering, “Holy shiiiit… Holy crap on the bottom rung of a goddamn ladder….”

I saw giant brush fires when we lived in California, and remember ashes raining down on our house like Christmas snow, but the one last night was somehow more dramatic.  It was the surprise, I think, and the incredible vantage point from the highway, almost looking down on it.

Everybody’s home again today, because of “spring break,” and I’m having trouble maintaining.  So, I’m going to stop right here, and ask the Question of the Day.

In the comments section, please tell us about the amazing things you’ve happened-upon while driving at night.  Spectacular crashes?  Elephants on the freeway?  Awe-inspiring fires that make you mutter incomprehensible profanities?  Let’s hear (read) it.