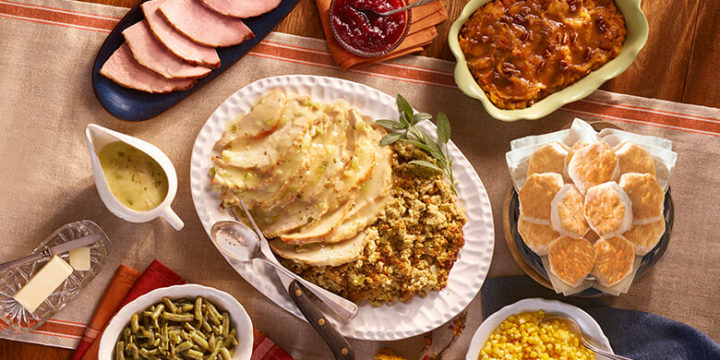 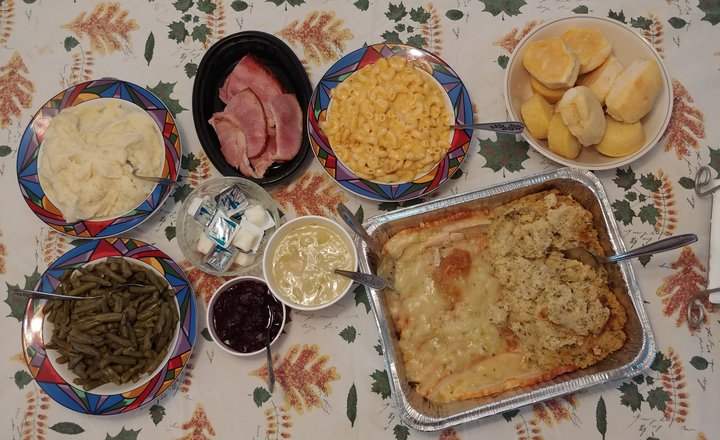 I probably could’ve done a better job with the presentation of the turkey and stuffing. I just left it in the aluminum tray, which doesn’t look too inviting in the photo. But everything was good, and there are tons of leftovers. Next year we’ll pick it up later in the day because we were forced to reheat everything and that wasn’t an exact science. And I still think mac and cheese was a dubious choice, but whatever. Those two small containers in the middle are cranberry sauce (didn’t taste it) and gravy (salty!). The turkey and ham were fantastic, the green beans were smoky and delicious, and everything else was damn good as well. It was a 100% success, as far as I’m concerned. And everybody else seemed to enjoy it, as well.

I’ve just been informed that I will be going to a movie in an hour or so, the “Queen movie” I’m told. Hey, whatever. I just do as I’m told. How long is that thing? Is it one of those three-hour deals? Why are movies so long now? Poor storytelling ability? I’m just not sure. I’ll have an update on that experience, ASAP. Have you seen it? What did you think?

I saw the real Freddie Mercury once, in Charleston, WV. He asked the audience what they thought of his mustache and they booed. He said something like, “Oh yeah, like I’m going to take fashion advice from West Virginia.” Something along those lines. Needless to say, I was howling with laughter. As with many things, I don’t remember the show in great detail, but remember how I felt about it: a rockin’ good time. Are you familiar with that phenomenon? You just recall the emotions surrounding an event, and that’s about it?

I posted a new episode of the world famous podcast today, for patrons. I just re-listened to it, and it’s funny (I think). Check it out if you’re so inclined. Episode 40 already! Crazy. Here’s the summary:

This is a short one, but I’ve got the meat sweats. And God knows I won’t need any sodium for the next several months. Maybe I’ll attach a flask full of turkey gravy to my leg, for the movie? Not a bad idea!

Have a great holiday, my friends.