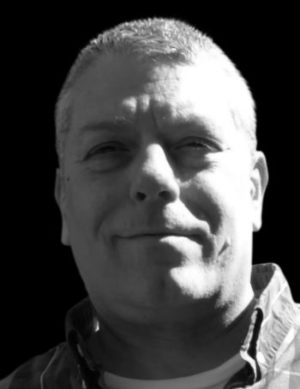 Hi. My name is Jeff Kay, and this is my website and misguided obsession.  Here, I publish humor articles I’ve written, and maintain a daily (give or take) journal that chronicles my ridiculous adventures in suburbia.  Welcome!

I was born and raised near Charleston, West Virginia, and now live outside Scranton, Pennsylvania, with my wife Toney, our two teenage boys, and a fantastic border collie named Andy.

For seventeen years I worked in the entertainment industry, for a large, well-known company (rhymes with ‘Warner Bros.’).  During that time I was highly stressed on a daily basis, but received tons of free CDs and concert tickets.  And how kick-ass is that?

I was “rightsized” out the door in 2007, and now have a similar job in a different industry, with lower pay and fewer perks.  But it sure beats the seven months of unemployment, in between…  I don’t do well with upheaval and uncertainty.  I know this now.  Wow!

The Surf Report is something I created way back in the 1980s, and it serves as an outlet for my creative tendencies.  And when I say creative, I’m talking mostly about fart jokes.

I recently finished writing a comic novel, and it’s in the hands of my agent.  I’m hoping, of course, that he’ll be able to find a publisher for it.  Stay tuned for further developments.

A Brief History of the Surf Report

I wanted to be a comedy writer, you see. Like the guys who wrote Animal House, and the people who worked for David Letterman. And that is what I finally admitted to the interviewer, after he prodded me to tell him what I really wanted to do with my life.

I not only didn’t get the job, but it was obvious the man could barely keep a straight face. This wasn’t exactly what I had in mind when I said I wanted to make people laugh…

My nemesis thought I was an immature little puke, and was probably right. I realize now that I should’ve just stuck to my original story: to pursue a career in the field of newspaper circulation, and advance through the ranks via hard work and development of loyalty and respect from all the paperboys I manage.  But he broke me down and I told him the truth.

I was thoroughly humiliated, and set out to prove that cigar-chomping suspender-wearing walkin’ talkin’ stereotype wrong. I began cranking out submissions to the National Lampoon, Mad magazine, Letterman, Johnny Carson, etc., brazenly rejecting the concept of working my way up from the bottom.  Unfortunately, it didn’t go so well.  I received a couple of friendly notes, but none of my pieces were accepted.  It was fairly discouraging.

I used to drive to Columbus, Ohio to buy records every few months, and a hipster guy I knew asked me to pick him up a copy of The Offense Newsletter during one of my trips. I had no idea what he was talking about, but tracked it down and bought an extra copy for myself.

It turned out to be a crudely typed, photocopied, and stapled-in-the corner fanzine about the artists who recorded for a British record label called 4AD. I had little interest in the subject, but the writing was good and passionate, and the whole idea of self-publishing was like a kick to the head.

Hell, I’d do it too! I’d show all those dream-crushers I didn’t need them. I’d just do it myself. And I did. That is to say, I did it myself — I’m still trying to show them. But, after coming dangerously close to calling my new publication Cancer: Pro and Con, I pumped out the first issue of The West Virginia Surf Report during a single sleepless night in 1984, or ’85 — who really knows at this point?

The name of the magazine was a joke, playing off the fact that West Virginia is a land-locked state.  Get it?  Pretty hilarious, huh?

I sent copies to everyone on the Offense zine contact list and, to my surprise, people actually seemed to like it. My little humor sheet was met with a degree of respect and contemplation I hadn’t anticipated. I received copies of other cool homemade publications in trade, along with friendly and encouraging letters from interesting people all over the world — and I was hooked.

After all the cold rejection, this was like a shot of heroin to me.  Not that I’ve ever had a shot of heroin, but you know what I mean…  And I’ve never recovered, not really.

Move to the Internet

In 1999 I discovered a website maintained by Krista Garcia, who had previously published a wonderful zine called Scaredy Cat Stalker.  It was an online journal, where she wrote about the stuff going on in her life.  She’d recently moved from Oregon to New York City, and I found the whole thing fascinating.

Krista is a great writer, and I became fixated on her site.  I started stalking the Stalker, so to speak, and emailing the author on a semi-regular basis:  “You’re so right about what you said yesterday… you and I think exactly alike!!”  Eventually she stopped replying, because I was starting to become kind of creepy, I guess.

But I was inspired, and created a horrible-looking website that tried to emulate what Krista was doing.  It went live in October 2000.  I called it The West Virginia Surf Report, but planned to continue publishing the paper zine as well.  It didn’t happen that way, of course, but I had the purest of intentions.

In the early days the readership consisted of my brother, four or five guys from my high school, and a couple of ex-coworkers at a now-defunct record store in Greensboro, NC.  But over the years a community of like-minded folks has emerged, and it’s what makes me happiest about the whole experience.

We call ourselves Surf Reporters, and we’re bound by a common tendency (ability?) to see the absurd in everyday life.  Most of us are well into adulthood, chronologically speaking, but still haven’t made the full transition, emotionally.

On many days the Surf Reporter comments are funnier than my main update.  And that’s something that might have bothered me in the past, but not anymore.  The readership is smart, talented, and funny, and I consider it a privilege and an honor that they’ve chosen to hang out here.

There’s always room for one more. If you’re new here, and the site seems like a good fit, I hope you’ll join us.  The comments are always hoppin’, so just jump in with both feet.  No reason to be shy, ’cause God knows nobody else is.

And just to be clear… you don’t need to have a connection to my home state to join the conversation. The site has little to do with West Virginia, specifically, even though West Virginia has a lot to do with me, generally.  It’s OK if you have a different background.  In fact, it’s a positive.  We have readers from all around the world, and different perspectives are always welcome and encouraged.

Thanks for stopping by!  I hope you enjoy your stay.

Buy Me a Beer!