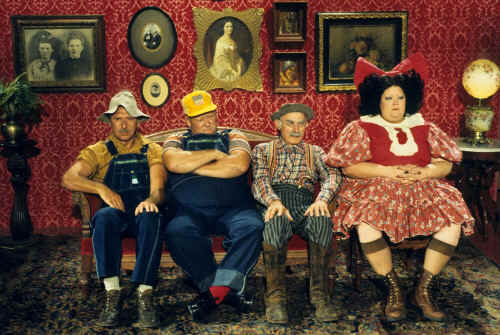 My parents were up here for a quick visit this past weekend, before they try to cheat the seasons again, and chase warm weather all the way to the southern tip of Florida, or whatever.

Their visits aren’t too bad, especially compared to others we have (and will) endure.  They try to be good guests, and it’s appreciated.  Just an effort is usually enough.  Ya know?

They offer to help us clean-up after meals, for instance.  While Sunshine just walks away when she’s finished eating, with her dirty plate still sitting there, and without even bothering to shove her chair back under the table.  Man, that really bakes my beans…

Nancy and Nostrils sometimes insist on helping us with the dishes, but always (always!) break something.  And it’s usually a painful item, like a pub glass from London, or one of my favorite coffee mugs.  They have a special talent for excruciating destruction.

Truthfully, I don’t really even want any help.  I just want someone to offer, then get out of my way.  That’s the best scenario, when it comes right down to it.  An offer, even an insincere one, does the trick.

So, my folks’ stays at Jeff and Toney’s Bed and Breakfast Inn and Old Country Saloon usually feel like a slam-dunk, and this one was no different.  I apologize in advance.  I know it’s best when everything goes to hell.  Sorry…

We took part in the normal “parents visiting” activities, including two restaurant meals, several semi-extravagant home-cooked meals, a Saturday swim meet featuring the grandkids, an inordinate amount of dog-walking, a visit to the mall, and lots of sitting around talking.  And even though I had an extra day off from work, I feel like there was no weekend whatsoever.

You know, the usual.

On Friday we went to dinner at a neighborhood pizza/pasta joint, and it was very good indeed.  And yesterday we went to lunch at Red Lobster, because my parents like to treat the Secrets to crab legs; they all get a kick out of the dismantling of crustaceans.

I only had a bowl of New England clam chowder and a salad, because I was still packed-out with breakfast biscuits.  Shit man, there needs to be at least a minimum of digestion time between meals…  Even a person of my size can’t just keep loading it in.  Something’s gotta give, eventually.

After lunch I said I wanted to walk next door to the Verizon store, to take a look at the Droid phone.  And all six of us dragged in there.  The place isn’t very big, and we instantly made it crowded.

I checked out the phone, and it seemed great.  I brought up the Surf Report, and it was a thing of beauty on that big screen.  When I look at it on my current phone it’s a mess, but the Droid is like a tiny computer in your pocket.  I’ve gotta have one.  The only downside?  Twenty-nine extra bucks per month, for internet and all the fancy stuff.  That might be a tough sell.  Very tough, in fact.

Then we went to Wegman’s to look for some kind of Kraft cheese, called Roka Blue.  Apparently it’s used in a “cheeseball” recipe, and is difficult to find.  I don’t know… I barely listen to that kind of thing.

While Toney and my Mom looked for the elusive so-called cheese I checked out the beer section, and ended up buying a six-pack of Breckenridge Avalanche Ale, out of Colorado.  Unfortunately, it wasn’t all that spectacular, which is always a bummer.  Life is too short for less than spectacular beer.  I should’ve just gone with the Stone IPA, which is fantastic, and which I had in my hand at one point.  Oh well.

After Wegman’s we went to the mall, and I snapped this photo of a man sitting outside Old Navy.  I thought about buying a bag of Skittles and having a contest with the boys, to see how many we could toss inside the guy’s mouth.

On Saturday, after the never-ending swim meet finally ended, Toney and I went to the beer snob tavern at Cooper’s, where I had two pints of Fuller’s Mr. Harry Bitter.  Yum.  Now THERE’S a beer.

We also had their crab dip and nacho chips.  God, how I love the beer snob tavern…  I feel at home there, for some reason.

And yesterday my Dad and I (my Dad) replaced the light hanging over our dining room table.  Toney hated the one that was there before, and wanted me to replace it.  “I’d better wait until I have some help,” I kept saying.  And she reminded me that I’d have some help this weekend.  Yeah, she never forgets anything.

And sure, it looks great.  But now the one inside our front door seems kinda dated in comparison — according to Toney.  See how these things work?  It’s no good, no good at all.  I’ll be on a ladder, screaming profanity three feet off the ground, within days.

But the weekend was good, overall.  My parents left this morning, and there were no arguments or teeth-grinding or door-slamming, or anything of the sort.  Again, I apologize.

I have to go to work in a little while, but it doesn’t feel like a work day.  I’m all disoriented, and discombobulated.  And this week is going to be weird, too.  We’re going to Toney’s cousin’s house for Thanksgiving, in a well-to-do suburb of Philadelphia.  Very pinkies-out fancy…

And am I looking forward to it?  No, not really.  My face is already aching, in anticipation of the fake perma-smile I’ll have to maintain the whole time.

The food will probably be good, though.  And Toney’s cousin’s family are nice, and decidedly non-Nancy or Sunshine-like.  So, it’ll be fine, once we’re there.

What are you going to do for the holiday?  Are you traveling, or having visitors, or none of the above?  Are you serving anything unusual this year, or is it always the same?  Tell us about it in the comments, won’t you?

And I’ll try to get my bearings back, and will see you guys again tomorrow.