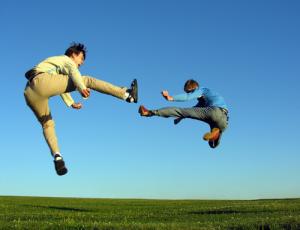 Throwing feces through a kitchen window. That would be a good title, wouldn’t it?  Maybe for a book, or a documentary of some sort?  I’m going to keep working on it.  I’m feeling genuine potential here.

Before we get started with this dubious exercise today, I need to address something. I guess our friend T. Farty caused a minor controversy yesterday?  Who could’ve predicted such a thing?  It seems that the story he submitted to me might not have been a genuine Farty original.  Many of you mentioned that it was very similar to a piece written by Douglas Adams.

I’ve never read anything by Adams, so I didn’t catch it.  I thought it was funny, assumed it was real, and went with it.  Last night Farty and I spoke via email, and he admitted that it was a story a friend told him a few years ago.  The friend had presented it as something that happened to him personally, and Farty “borrowed” it.

So, I apologize.  I don’t think there was any malicious intent, and Farty remains a friend of the Surf Report.  But a few of you were upset, and I’m sorry about that.  I certainly don’t lift written material from elsewhere — without acknowledging it, anyway — and won’t publish articles that have questionable origins.  I’m going to add a note to the top of that piece, and we’ll just move on.

And by the way… I am not T. Farty McAppleass.  I noticed a couple of you thought it was me.  I don’t comment under fake names anymore.  I used to be Sam Gassaway, Mr. Chamberlain, and dozens of others.  But those days are over.  T. Farty and I are two different people.

Our youngest son is serving a two-day suspension from Middle School, for fighting.  Some kid kept needling him, so he punched him in the jaw.  What’s the problem with that?  I told him he might be in trouble at school, but he’s not in trouble at home.  And we went to Moe’s today for lunch, while all his friends were sitting in class with drool dripping from the corners of their mouths.

I was never much of a fighter (I’m no Buck, who reportedly threw kids through trophy cases and whatnot), but I was forced to take a little action during my Jr. High days.

I can instantly remember four “fights,” and there were probably a couple of others.  I put the word in quotes, because they weren’t really fights.  It was just me finally being pushed too far, becoming wildly infuriated, and punching someone in the face.  After that… nothing.  In every instance the other guy didn’t do a damn thing, AND they never bothered me again.

One kid, JF, kept giving me shit, day after day.  I barely knew him, but he zeroed in on me for some reason, and was making me miserable.  Finally, during gym class one afternoon, I punched him so hard, I think his head went all the way around.  I’d never hit someone as hard as I hit him, and it made a sweet sound like on Cannon or Mannix.

The gym teacher, Coach Dye, spanked me in front of the whole class.  He gathered everyone around, had me lean against a chair, and gave me two or three swats on the ass with a paddle – as my classmates laughed and cheered.  Simpler times…

My mother was pissed about that, but whatever.  I got the kid off my back, word spread throughout the school about the Punch Heard  ‘Round the World, and there was no downside from my perspective.  Sure, I was briefly humiliated in front of everyone, but that happened every time we had to climb the rope, do some “tumbling,” or whatever other gayness they cooked up for us. When it came to humiliation, I was a seasoned veteran.

Did you do much fighting in school, or even as an adult?  Thankfully I haven’t had a fight since 1980, or so.  But what about you?  Please give us the highlights in the comments section below.

Also, were you ever spanked in school?  I got it several times, mostly at good ol’ Dunbar Elementary.  I know this might come as a surprise, but I was somewhat sarcastic as a child.  If you have anything on this subject, we’ll need to know about it, as well.

And I’m calling it a day, my friends.  I’m planning to update again before Monday, so check back.  I can’t guarantee it, but those are the plans.

Leave a Reply to Rick in the UK Cancel reply