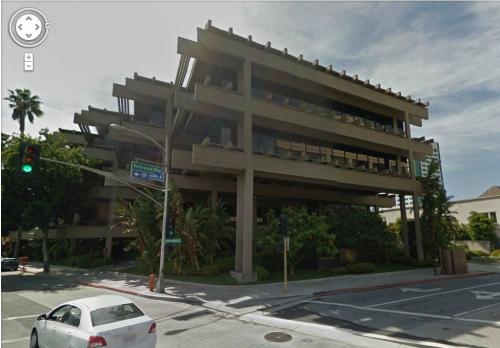 I hate to put this horrible image into your heads, but I was thinking about something while taking a shower a few minutes ago. It’s a story that still annoys me, yet whenever I try to explain it… NOBODY is sympathetic. They always seize upon an unimportant part of the tale, and go off on a tangent. Almost every time.

So, I’ll see how you guys react. It’s gonna be a quickie, because Toney’s home and I’ve been upstairs chatting with her all day, instead of writing.

Anyway, when we lived in California I worked in the building above. It’s located at 101 N. Hollywood Way in Burbank, directly across the street from the main gate of Warner Bros. Studios. It was the WEA Building for decades, but is now used by Warner Bros. International, or somesuch. You know, seeing as how the once-mighty WEA doesn’t really exist anymore.

And there was an unofficial pecking order. I didn’t create this system, it had been in existence for years before I arrived. Can you tell I’m already getting defensive? But the more important you were, the higher up in the garage was your parking space. The VPs and directors were mostly on level one, and the managers (like me) were mostly on level two, etc.

For a year or so, I had my space on level two, and all was right with the world. Then, one day I arrived at work… and there was a big-ass $50,000 pick-up truck in my space. What the? Slightly irritated, I parked in the space of a guy who was on vacation, and went upstairs to my office. Somebody just made a mistake, of course. Probably a visitor, or something. I’d just email the building manager, and he’d take care of it.

But no. It was no mistake. Some guy who was promoted from the Chicago branch had just started that day, and they freaking bumped me. Bumped me without telling me. They decided he was more important, and gave him my spot! I got moved down seven spaces, or so, right on the cusp of level three. And this guy was a manager, just like me. WTF?

I complained about it to my friend Tim, in West Virginia, and it was highly unsatisfactory. He couldn’t get past the fact I had an assigned parking spot. NOT THE POINT! I believe he called me Little Lord Fauntleroy, and said something about my delicate sensibilities. He kept talking about my private parking space “in Hollywood,” and how he’d trudged two city blocks in snowy slush that day, to get to his office.

Grrr… The assigned parking space is some kind of emotional sticking point for everybody. But It has little to do with the story. It was the bumping that bothered me. And nearly being the only manager on level three. I know it seems petty, and egotistical. But is there any sympathy out there? Even an ounce? That shit made me look bad.