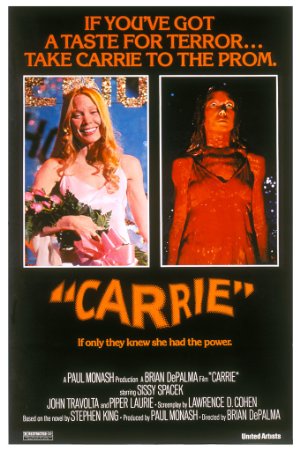 Hello Surf Reporters! I’m not feeling so hot today, and actually called off from work. This is a rarity. Sometimes I go years without missing a day. But today I just can’t do it. Oh well. I’m sure they’ll be able to endure this devastating hardship.

Before we move on… What do you call it where you live? Call off? Call in? Call out? I’ve heard all three, but prefer call off. …Yes, I have a preference. What of it?

A few nights ago I watched Carrie on Netflix. It’s the first time I’d seen it since the early ’80s. It was enjoyable, but nothing really happens until the last twenty minutes or so. Well, there’s the “Plug it up!” scene at the beginning, with loads of bushy 1970s nudity, but nothing “scary.”

Plus, whenever I watch a movie from the ’70s, I notice how the scenes sometimes drag on and on. We’re now used to quick-cuts, and those older movies often feel like they’re creeping along.

For instance: the girls who pelted Carrie with pads and tampons were made to show up after school every day, and do an hour of exercise. The movie showed them doing jumping jacks, and push-ups, and sit-ups for what felt like the full 60 minutes. It just went on and on.

It was a fun movie, though. I’m glad I watched it. It’s not nearly as good as Halloween, or the underappreciated Black Christmas/Stranger in the House. But it’s certainly entertaining. What are your favorite horror movies from the ’70s, or early ’80s?

And before I move this operation to the couch, I have one more Question for you guys. During the movie, Carrie’s creepy religious fanatic mother kept saying things that made me cringe a little. She used odd phrases, like “dirty pillows.” I can see your dirty pillows. Everybody will. WTF? I can’t explain why, but it caused me to make a face like Gilbert Gottfried.

In the comments section, please tell us what words or phrases give you the heebie-jeebies for some reason. Just regular everyday words that make you cringe a little… Supper and commode do it for me. Shit! I just had a full-body shiver.

Do you have anything on this one? If so, please share.

And I’ll see you guys again soon. Notice how I didn’t say tomorrow? I’ll try, but can’t promise anything.