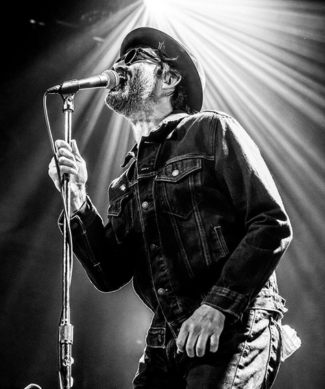 The boys and I drove down to Philadelphia yesterday to see one of our favorite bands, The Eels. I’ve seen them at least eight times now, and this is the third time for the younglings. Always a blast. However… the 25-year-old me would’ve been appalled by the 55-year-old version. ‘Cause I spent a big hunk o’ yesterday kinda dreading the hassle of it. Ya know? I certainly wanted to see the show, but it’s such an ordeal… Just sitting on the couch, drinking a beer or four, and watching Beachfront Bargain Hunt with Toney sounded like a more pleasing option. It’s shocking, I know.

But the tickets were already purchased, and we were meeting Steve and his wife Myra down there. So we drove through a persistent rain to Philly and joined them at a bar a few doors down from Union Transfer, where the show would be happening. It was a place called Roy-Pitz Barrel House, for some reason, and they brew their own beer, etc. Cool place, with great music (Sex Pistols, Germs, Wire) cranking.

I had a fantastic idea there that I’m exceedingly proud of. Myra ordered some kind of macaroni and cheese with duck meat in it. And get this! I suggested they rebrand it quackaroni and cheese. Tell me that’s not perfect. Very proud.

I had two IPAs and some fries. Everything was good, and one of the owners even sat with us for a while. Nice dude. Great place.

The opening act was someone who bills himself as That 1 Guy. He plays a homemade instrument he’s dubbed “the magic pipe.” It looks like a long vacuum cleaner hose. Fairly bizarre, but he was certainly talented and got a lot out of his… pipe. He integrated a small amount of magic, as well as puppetry, into the show. Like I say, fairly bizarre. Check it out.

And the Eels just flat-out rocked the joint. You never know what version of the band you’re going to get, but this was the one I like the most: stripped down and rocking. No violas… no grand piano. And it was freaking loud too. So much fun! They played stuff from their entire catalog, including reworked versions of “Novocaine for the Soul” and “Mr. E’s Beautiful Blues.” It feels like they don’t play those very often. Fantastic show.

The leader, known as E, was hilarious throughout. After they blasted through four or five sped-up tunes right out of the gate, including a surprising cover of “Raspberry Beret,” he shouted, “I’m old as fuck! But goddamn, I rock!!” Later he assured us that what we were witnessing was a “display of badassery the likes of which most people have never experienced.” Heh. Everything he says is tongue in cheek. He also kept referring to Philadelphia as The Brotherly Apple. Some of that stuff is in this cell phone footage that’s surprisingly good.

I can’t find a setlist yet, but it was very close to the Boston show, right here. The picture above is from the Brooklyn show, the night before we saw them. I brazenly lifted it straight off Instagram. Nice photo, huh? By the way, I found out in his memoir that E is almost exactly the same age as I am. Old as fuck. Thanks for the confirmation!

The drive home was a real sphincter-pincher. It was POURING rain almost the entire way. There was water pooling on the turnpike, and it felt like I was going to hydroplane into the woods at any second. It sucked ass, fully and completely. It felt like it took seven hours and my shoulders were aching with tension.

But now that it’s in the rearview mirror, I’m definitely glad I went. It wasn’t without its aggravations, but I’ll only remember the show and the good times beforehand at the bar. The shitty stuff fades, for some reason. Right? Right.

I’m not running on all cylinders this morning, my friends. And I’m going to call it a day. Please be sure to check out the podcast if you haven’t already. Right here. Also, the exciting new site: Explanations for Aliens.

And I’ll leave you with a simple Question: What do you think the 25-year-old you would think of the current version? Any thoughts on that? Please use the comments.