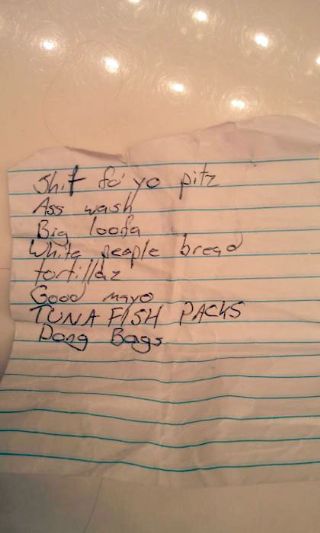 Hello, boys and girls.  Yesterday I was summoned to work early for a meeting, and need to go in today, as well.  On my scheduled day off…  So, I guess what I’m saying is, sorry for missing yesterday’s update and I also wouldn’t expect too much from this one.  Heh.  I apologize, but real life gets in the way sometimes.

The shopping list to the right was supposedly found in a Wal-Mart somewhere.  I can’t vouch for its authenticity, but it made me laugh and I thought I’d share.  It also reminds me… I think I might also be running low on ass wash.  I’ll have to check on that.  I hate when I have to use shampoo; it makes everything slick and well-oiled.  And I can’t have that.

Some people at work were trying to get a group together, to take skydiving lessons.  And they asked if I’d like to join them.  Yeah, I didn’t stop laughing for a solid two to seven minutes.

There is NO WAY.  Why would a person do such a thing, from an airplane that’s not on fire?  It’s simply out of the question.  My genitalia would suction so far into my body cavity, doctors would have to use needle-nose pliers to bring it all back to sunlight.  Just the notion of voluntarily jumping from a plane, for “fun,” makes me laugh from two to seven minutes.

Have you ever done it?  Or seriously considered it?  How about other “extreme” sports?  We’ll need to know about it.  Please use the comments section below.

I knew a guy in California who jumped out of airplanes and sang in a barbershop quartet.  And it was very difficult for me, because I desperately wanted to mock the latter, but knew he’d bust out the former to shame me.  I didn’t care for it.  I experienced an advanced case of mocker’s frustration, and that’s not to be trifled with.

You know who really sucked?  Foreigner.  The band, I mean.  I liked them when I was in school, and went to see them play live in Huntington.  It was Foreigner, Wet Willie, and Nantucket.  Wet Willie was a lot of fun, but Nantucket scared the hell out of me.  I also saw some guy snort cocaine in the audience, off a tiny spoon on a chain.

In any case… I was a fan of those guys when I was 16 or 17, and am SHOCKED at how shitty they sound now.  Just breathtaking shittiness…  Almost as bad as Toto, and that’s saying something.

Some of that classic rock stuff holds up, but not Foreigner.  Not for me, anyway.  Do you have anything like that?  Bands or singers you loved during high school, or whatever, that make you cringe now?  I’m not talking about guilty pleasures, or stuff you still secretly enjoy but don’t want to talk about.  I mean music that you really and truly loved back in the day, which sounds like a big basket of turds to you now.

I have a feeling I didn’t do a good job of explaining that…  Oh well.  We’ll see what happens.  We can extend it to TV shows and movies, too.  Hell, if we’re going to confuse the matter, let’s really confuse it.

Before I call it a day here, I wanted to let you guys know that I’m going to try something new next week.  Every Monday I’m going to start sending out a special email from the bunker.  Sometimes it might contain stuff I don’t feel comfortable posting to the website, like Nancy tidbits, and other times it could be more personal things, or simply a recap of the previous week.  No rules or regulations…  We’ll just see how it develops.

So, if you’re interested in receiving my weekly dispatch, be sure you’re subscribed.  There’s a handy-dandy box in the sidebar.  You’ll even receive a free ebook as a bonus!  And if you’re not interested, that’s cool too.  This is an all volunteer army.