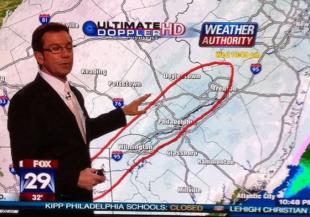 So, how’s 2014 treating you so far? I’d give it a B-. Nothing too horrible, but I’m tired. I had to get up at the ass crack of dawn this morning to take the younger boy to the orthodontist, and the morning hours don’t agree with us night people. I’d love to call off from work, climb back into bed, and snooze for another four hours or so.

But, of course, that won’t happen. I have a strange habit of showing up when I’m expected. There’s snow on the way, too. A few days ago “they” were saying we might get as much as 16 inches of the stuff, but now the prediction has been cut down to 5 inches, or so. Still, the drive home tonight could be an eventful one. Something else to worry about…

School is closed (once again!) in anticipation of the snowstorm. Nothing is happening out there, but everything is shut down. I don’t think our kids have been to class since late October. It feels like it, anyway.

I have no doubt there will be a few call-offs at the job too, and we’ll be bobbing for apples in an open sewer all evening. It never stops, literally.

But I don’t fault people for staying home if they feel unsafe. Some people truly freak out at the prospect of driving on slick roads, and I understand and accept that. But I’d like to know about the LAME excuses you’ve heard for not showing up. Please tell us about them in the comments section below.

One of my all-time favorites: a person called off at one of my former jobs because he’d been contacted by an aggressive bill collector who upset him so badly he wasn’t able to report to work. Ha! I also like the ones that can’t come in because their roommate is stressed out. Not them, their roommate. Stoopid.

Do you have anything on this subject? If so, please share.

And before I call it day… you might have noticed a few small changes to the site? I (somebody else, who knows what he’s doing) removed the Essential Daily Links box in the sidebar, where Bunker Cam and Further Evidence used to be housed. And I’m going to start posting those things directly to the site, instead. I don’t think too many people were clicking the links — my own wife didn’t even know they were there.

Also, the way my life is going, I’m not able to write actual updates as often as I once did. This new format will keep the site from becoming stale. I’m going to attempt to post something every day — seven days per week. It might be a Bunker Cam photo, a Further Evidence link, an actual update, or any combination thereof.

It’ll be an adjustment for long-timers, but I think it will ultimately be a positive. If you come across any wacked-out photos, websites, or news articles that you think are Surf Report-worthy, please send them my way. The internet is the gift that keeps on giving, and I’m gonna try to curate a small cross-section of it. Help me out, won’t you?

And I’m going to work now. I hope you guys have a great day, and the snow doesn’t cause too many problems for any of us. Sheesh. It’s already been a ball-masher of a winter, and it’s just gotten started.

Now playing in the bunker
Buy yourself something cool at Amazon!