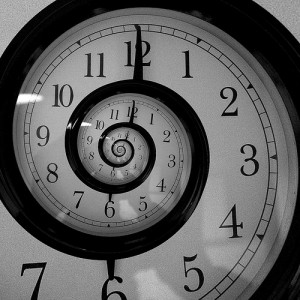 I woke up in a foul mood this morning, for no real reason.  Contrary to popular belief, I’m usually in a good mood, but not today.  I think I’m at the end of my rope with all these freaking hours I’m working; I’m exhausted and way past burned-out.  I was irritable and agitated before I’d even separated my heft from the platform

Plus, I’m waiting on several important emails.  And do they arrive?  No, they do not.  That doesn’t help.  I’m highly accomplished in the art of being an impatient nutcase when it comes to waiting.  I start getting all fixated and strange.

So, I wouldn’t be expecting too much today.  Just a heads up.

I get to meet my new boss this afternoon, and I’m a little uneasy about it.  My current boss is leaving the company, and they hired his replacement from the outside.  Clearly, she has the power to make my life a living hell.

There’s no indication that she’ll be so inclined, but it’s a concern.  I’ve worked for some really great people, and a few walkin’ talkin’ prolapsed anuses.  At this point I don’t know if I even possess the energy to deal with an anus.  I really don’t.

Wish me luck.  Hopefully she subscribes to the “if it ain’t broke…” theory.  Time will tell.

For a few weeks I’ve been tinkering with a new website, where I plan to post about creativity, writing, and publishing.  I want to do interviews with writers, and other folks involved in creative endeavors.  It won’t necessarily be about the laughs, although there will certainly be some humor.

Today I’m prepared to give you guys a sneak peek.  Please note that it’s still a work in progress, and some things aren’t fleshed-out yet.  So, there’s no need to point out all the failings, thank you very much.  It’ll get better with time… just give me some time.

The first post will serve as an introduction, and an edited version will probably be used on the ABOUT page, as well.  Many of you are familiar with the story I tell in that first update.  But I needed to do it again, to get the ball rolling.

Also, most of you didn’t know the title of my novel, and now you do.  For what it’s worth.

Please note that the custom header was created by a guy at fiverr.com.  I love it, and it cost me five bucks.  Well… kinda sorta.  It was actually my fifth go-round with designers from that site, so it cost twenty-five dollars total.

Here are the four rejected headers.  That one on the bottom is really strange, like something you might see on a religious website.  It was created by an argumentative woman in a mysterious country, like Singapore or someplace like that.  She argued with me, in broken English, during the entire process.  Then she rejected my ideas, and sent me that weirdness.  I decided to just let it go.

Anyway, I plan to post two or three times per week at the new site.  It shouldn’t be a problem, because it’s about subjects that interest me.  It’ll be stuff that’s not really appropriate for the Surf Report, so I can just let ‘er rip without feeling guilty.

Some of you might be interested in this new project, and others won’t.  And that’s cool.  If it’s not your cup of tea, don’t sweat it.  The sites will have different audiences, eventually, with a small overlap.  At least that’s the way I see it.

And I need to call it a day, my friends.  I need to go shake hands with my new overlord.  I’ll leave you now with a Question of the Day that occurred to me while listening to George Noory’s show a few nights ago…

If a man (or woman) entered your life in some way, and claimed to be a time-traveling visitor from fifty years in the future, what questions would you ask him or her?  What would you want to know?

Please tell us about it in the comments section.