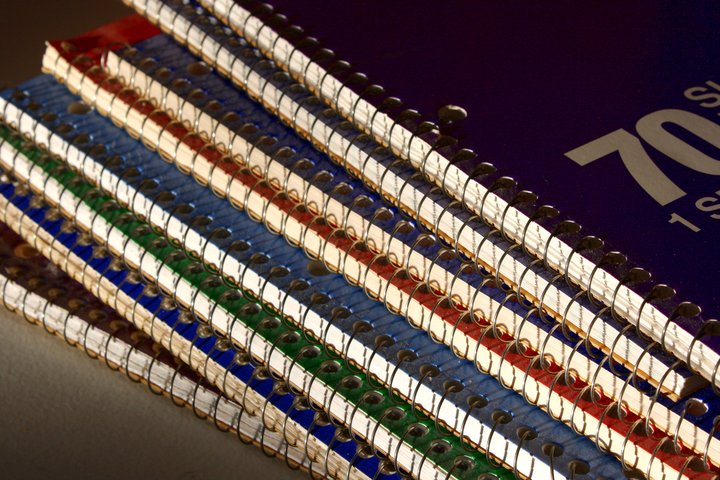 Toney and I were in Target a few days ago, and they have all their back-to-school stuff out. Man, I used to hate that crap when I was actually in school. It was a foul wind blowing off the waste treatment plant of life. But now? I’m a huge fan. I love office supplies.  I look at them on Amazon, and I sometimes pop into Staples just to check out their ballpoint pen selection. Is that weird? I’m also a complete sucker for notebooks. I have stacks of them in the bunker, and continue to acquire the things. Occasionally I even splurge on the expensive kind, straight outta France. Which, by the way, are even better than Moleskine, in my opinion. Yes, I spend way too much money on that kind of stuff.

Anyway, we were looking at the notebooks at Target, and they have a bunch with stoopid motivational sayings on the front. Probably marketed to Middle School kids… I can’t remember any specifics, but they’re real eye-rollers, believe me. Or, in some cases, completely incomprehensible.

And I told Toney they should have notebooks with my old August back-to-school motto: This Year Is Going To Be Different! Every year I made that promise to myself. Sometimes I was thinking about academics. I was certainly capable of being a good student, but never put forth one ounce of effort beyond whatever it took to get a C. Unless, of course, I actually enjoyed the class. And that was rare. But often my private August proclamation had to do with the social aspect of school. I would ease back on all the defensive sarcasm, I vowed, and become more of a normal human being. This year things are going to be different, dammit!

Yeah… Fast forward one month and I’m in danger of failing two of my classes, due to chronic half-assery, and I have in-school suspension because I told somebody in fourth-period French they look like a duck with Down Syndrome, or whatever. Ahhhh, it’s the circle of life. Next August it’ll start all over again.

Now I’m going straight to the questions. I got no time for jibber-jabber…

In the comments section, please tell us what a real-life back-to-school notebook motto would be. This is a stretch, I know. But all that feel-good bullshit on the actual notebooks makes me wanna puke. Let’s bring some reality back to this bitch.

Also, what do you believe you spend way too much money on? Do you have anything on that? The other day I saw these giant Moleskine notebooks at Sam’s Club, two packaged together, and I can’t stop thinking about them. It’s a sickness, I tell you. It costs $25 for the pair, and I sure as shit don’t need them. Do you have anything like that? Bring us up to date on it, won’t you? Previously, I would’ve said alcohol. Most definitely.

And I need to go to work now, my friends.