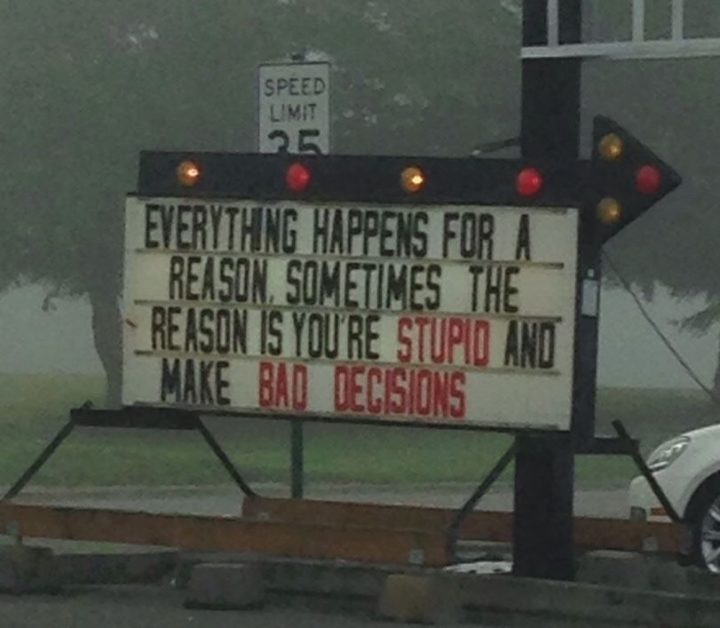 I have to be at work three hours early today and, believe it or not, that small change will be enough to throw me off-track for a couple of days. I’m not sure why, but my ability to adapt is now greatly diminished. I used to be able to stay out late drinking great tankards of Meister Brau or whatever, sleep a couple of hours, and put in a full day, Or I’d work all sorts of random shifts, back to back, without even thinking about it. Now? Any small change sends me spiraling. I’ll still be feeling this crap tomorrow evening, and possibly into Saturday. I am, at this point, a full-blown puss.

Because of my early day today, I told myself I’d write this update yesterday. Hilarious. That shit didn’t happen, and I was foolish to believe it would. I’m the guy who generally did all his school assignments in home room, the day they were due.  I remember writing a book report that way, for a book I never opened. I just took the description straight off the back, added my manufactured opinion of the work, and turned it in. However, the description included the phrase “comely twins,” which gave me away. The teacher wasn’t buying it and I was grilled at length, in front of everyone. I was tap dancing as fast as I could, but don’t believe I fooled anyone. Oh well. It’s not like there was much integrity to defend, anyway.

The other day in NYC we were in the bus station, waiting to board. Everybody was in a stupor, after stumbling in off the streets of Manhattan. We’d all be asleep within minutes. But as we were standing there, a giant bird appeared and created a brief blast of mayhem. The thing was huge, like a guinea pig with wings, and was just wildly flapping and flopping inches above our heads. Somebody yelled, “Jesus Christ!” and we were all ducking and putting our hands on our heads. Good stuff.

But I don’t like birds inside a building. When I was in Atlanta I used to hear people say that if a bird gets in the house, a family member will die. That’s some old school southern superstition, of course, but I didn’t like the sounds of it. I mean, seriously.

In fact, I was working at a bookstore in Atlanta — The $3 Book Sale — and a bird got in one evening. I was working with a cutesy cheerleader type girl, who was probably 16 or 17 years old. We chased that bird around with brooms, and finally got it out of there. It was all a big laugh, and a splendid time was had by all. But… two days later the girl’s dad fell while painting their house, broke his neck, and died.

So that shit’s cemented in my brain now. And any time I encounter a bird inside a building I get uneasy. I had visions of our bus sailing off a cliff, or it rolling down Interstate 81 on fire. But we made it. I have no doubt, though, that somebody died. Somebody associated with our group is no longer alive, and that winged reaper was there to warn us. Shit! I just had a full-body shiver. I sure hope Broadway Betty is OK.

I need to go now. This is ridiculous. It feels like the middle of the night, and it’s 9:28 am. I’ll be destroyed for days. But before I call it a day, I’d like to ask for your input on something.

When we first moved to Pennsylvania there was a man who lived in our neighborhood named Spring Steel. Or maybe Spring Steele. I’m not sure about the spelling, but he was a prominent member of the community who moved out shortly after we moved in. He probably saw the writing on the wall… In any case, I always thought his name sounded like a character in an action/adventure movie. Or maybe a flawed but brilliant detective, or something. Spring Steel!

The man who ran the hardware store in Dunbar when I was a kid falls into the same category: Kenny Jack! Hell yeah.

For a question, I’d like to know if you’ve ever met anyone with a name like that. A name they might use for a hard-nosed plays-by-his-own-rules adventure movie hero. This might go nowhere, but I’m flying by the seat of my enormous pants here. Please share whatever you’ve got in the comments.

Also, if you have anything to tell us about superstition, please do so. Are there any that you kinda sorta believe? Or maybe not believe, but consider? Have any come true, like my bird story above? Please bring us up to date on it.

And I’m going to work now.