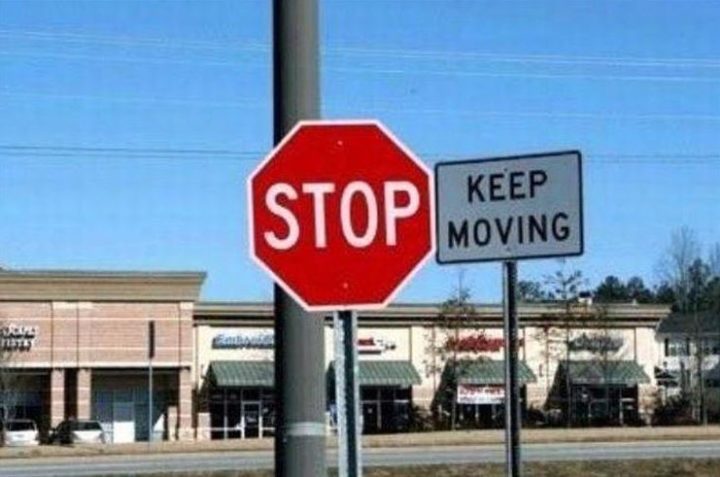 Sorry I’ve been away for so long. It wasn’t planned, it just sorta happened. I’ll try not to let it happen again. Ahem. I have a few odds and ends for you guys today: shit’s been building up. So, let’s get to it, shall we? 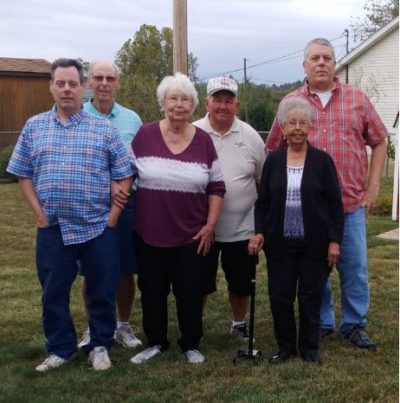 — I was recently in West Virginia, visiting my parents. It went well, thanks for asking. On Sunday all my living aunts and uncles converged on the place, along with my brother, and here’s the Kay side o’ the family. My mother’s side did not participate in the photo session, but they were there too. It was fun. I’m not sure what’s going on with me, though. It looks like I’d just spotted something suspicious off in the distance, and was trying to figure out what I was seeing. Also, I’m towering over everyone. Oh well.

That’s my brother, my dad, aunt Marg, uncle Danny, aunt Charlotte, and my big doofus ass. “What the hell is that thing?” In any case, it was a fun day: lots of stories and lots of laughs. It was good seeing everyone. 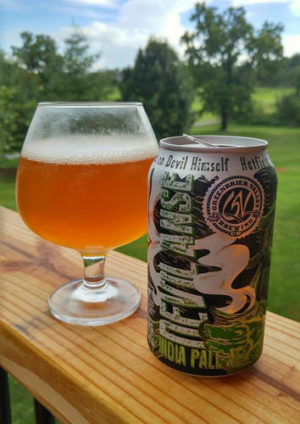 — While in West Virginia I had a few local goals. I wanted to patronize a Tudor’s Biscuit World, go to Budget Tapes and Records, and buy a case of Devil Anse IPA. All are WV exclusives, and I was able to achieve my lofty goals. At Tudor’s I had a bacon and cheese biscuit, and it was both huge and tasty. It’s good for you, too! Simply packed with nutrients. …OK, it’s just salt and fat. What do you want from me? The people at Budget weren’t friendly, but I spent a half-hour there anyway and actually bought two used CDs from them, both by ELO. Weird… They were super-cheap, and looked like they’d never been played. I got Out of the Blue and A New World Record for a total of $5. Not bad. And I got the case o’ beer at Drug Emporium on Patrick Street, for about $50. It’s not cheap, but it’s damn good. It’s in the downstairs fridge as I type this, chilling and preparing itself for battle. Toney doesn’t like it very well, so I’ll probably drink the whole thing. I’ll try to pace myself and savor it. We’ll see how it goes. If you live away from where you grew up, what MUST you do or buy when you revisit? That’s the Question of the Day. Please let us know. Use the comments section.

— Yesterday I received upsetting news, my friends. After more then fifteen years I was booted from the Amazon affiliate program. They said I violated their Terms of Service by encouraging you guys to click through my links. So, I’m out. No warning… just ACCOUNT CLOSED. The email says it may be appealable, but they’re pretty hardcore. An appeal is a longshot, at best. No, I think I’m at the end of the road with them, which sucks. It makes me sad. I wish they’d issued a warning and allowed me the opportunity to fix the problem. Ugh. 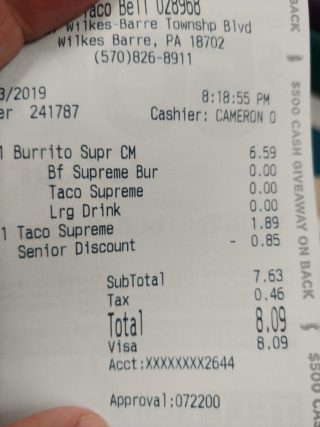 — In more upsetting news, I recently visited a Taco Bell near my job. I always get the same thing, and know exactly how much it costs. This time it was cheaper, and I assumed the dipshit cashier rang it up wrong. So, I snatched the receipt out of his ball-juggling fingers and took a look. Check this shit out! The little prick gave me a Senior Discount. I just looked up from the receipt and said, “Are you serious?” and he about shit himself. We’d had previous encounters, and I clearly unnerve him. He just turned and scampered into the kitchen. Senior discount! Does a senior eat all that stuff? No, he does not! He eats one taco and a small coffee. I’m getting fired up just thinking about it.

— Toney texted me this link earlier and wrote, “This is the most Pennsylvania thing you’re going to see all day.” Check it out. The local news station has a hotline where people can call in and leave comments on whatever subject they choose, and it’s comedy gold. This is a weekly recap, I believe, not the main Talkback 16, or whatever they call it. Anyway, you should check it out. It’s good stuff.

— And finally… I have a new episode of the podcast for you guys and I’m pretty happy with the way it turned out. The bulk of it was recorded while driving on my West Virginia trip. It’s an unusual episode; I’d never attempted field recordings before. Some of it’s kinda rough, but there are laughs for sure. Give it a listen if you get the chance. At the handy widget below, or wherever you normally get your podcasts. It’s out there, available everywhere.

I’m calling it a day, boys and girls. One more day of work, and it’s the weekend already. Pretty nifty! I could get used to the two-day workweek.

Have a great one! And don’t forget the Question. Use the comments section.

Support us with a monthly donation at Patreon, and get an extra podcast episode every week!