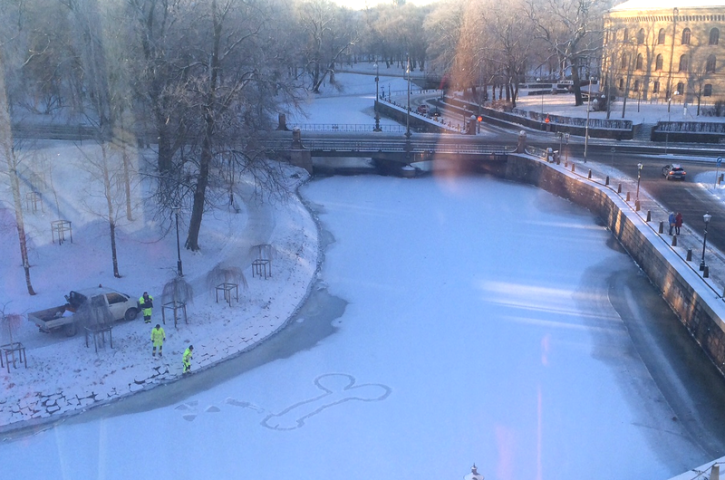 We got roughly a half-inch of snow here at Chez Kay from the Storm of the Century(tm). Apparently we were literally on the outer edge of that thing, because everyone was clobbered just a few miles south of us. In fact, there were nine inches on the ground where I work, 36 miles from our house. And some of my co-workers had over a foot. It’s weird, but I’ll take it. We “shoveled” with a broom.

On Friday night I worked until 1:30 am, and as I approached my exit… saw what must have been twenty emergency vehicles with flashing lights in the southbound lanes of I-81. It looked like a carnival of tragedy over there. I was heading north, but could see two cars in a mangled mess as I passed, and it didn’t look good. Not at all. It caused a chill to go up my spine, relieved only by the sack of cheeseburgers I purchased at McDonald’s a few minutes later.

The next morning I shuffled downstairs, and Toney said, “Did you see that big wreck on 81 last night??” Turns out it was caused by a wrong-way driver, and four people died. The newspaper article said it happened at 1:16 am, and I probably passed by there at 2:00 am. Freaky, man.

Check out these two articles about the accident, and pay special attention to the comments at the bottom. We’re very near the end of civilization, right? I sometimes blame all the rage and kneejerk conspiracy theories on the local assholes, but Facebook makes it clear it’s everywhere now. People are goddamn stupid, and CONVINCED they’re smart. It’s not a great combination.

In any case, have you ever happened upon recent carnage on a roadway? Please tell us about it, if you’re so inclined. How many burgers did it take to shake it?

We sent our oldest son to Florida, to spend some time with my parents. He needs a change of scenery, and some time to think. He’s not in trouble, or anything. He’s just 19 and… adrift. Just like I was at 19. Well, actually he’s got his shit together better than I did, but it’s similar. A week away from his friends and normal routine might give him an opportunity for reflection. At least that’s the hope.

I took him to the airport yesterday, gave him a hug, and told him I’d see him soon. And… this morning I spoke with him, and they were getting ready to go on an air boat ride through the Everglades. So, it’s just turning into a vacation. NOT what I had in mind, but whatever.

At what age do you think you truly grew up? I’m still a work in progress, and that’s not really a joke. Toney keeps me from coming completely off the rails, but if it weren’t for her… I think I’d probably still be neck-deep in dumbass. I’ve always been able to maintain a job, and think I’m a decent dad, but am still nowhere near a full-time adult. Oh, I can fake it fairly well, and turn it off and on, but I’m not even in the same hemisphere as the adults of my youth. Do you think they were faking it too? Somehow I doubt it.

Speaking of faking it, I need to go now. The workplace beckons.